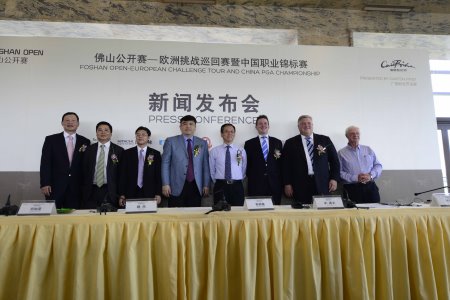 Canton First, the innovative urban lifestyle development brand of New World China Land Ltd., has been announced as the presenting sponsor of the US$350,000 Foshan Open, which takes place at Foshan Golf Club from 17-20 October.

The tournament forms part of the finale to the 2013 European Challenge Tour season, and is guaranteed to attract some of the golfing stars of the future who will battle it out for one of the top 15 positions in the Challenge Tour Rankings and a place on The 2014 European Tour International Schedule.

Founded in 1987, the Challenge Tour acts as a stepping stone to The European Tour for some of the world’s most talented young golfers who have their sights set firmly on joining the golfing elite.

Players such as the reigning US Open Champion Justin Rose, the 2010 Open Champion Louis Oosthuizen, the 2010 US PGA Champion Martin Kaymer and Ryder Cup hero Ian Poulter have all come through the Challenge Tour.

“Coming to Foshan is a major step forward for the Challenge Tour,” said Ben Cowen, The European Tour’s Deputy Director of International Policy. “China is a key part of our strategy, and we hope to see more and more Chinese pros developing their careers via the Challenge Tour, just as players from many other nationalities have done in the past.”

The China Golf Association sees the new event and the arrival of the Challenge Tour as an opportunity for the country’s rapidly-expanding group of talented young players to gain more chances to play, both on the Challenge Tour and in other international tournaments.

“China has some very talented young pros and amateurs now,” said Zhang Xiao-ning, Deputy Chairman of the China Golf Association. “They need the opportunity to play in quality international events with World Ranking points, and we’re happy that half of the 126 players at the Foshan Open will be from China. We need more international events to open up this sort of opportunity to home players.”

With players from more than 20 countries worldwide converging on Foshan Golf Club in ShishanTown, Nanhai District, Canton First sees the Foshan Open as the ideal platform for showcasing not only its exciting new lifestyle community, but also the city itself.

“Our Canton First community was the brainchild of our chairman, Dr. Henry Cheng,” said Kenneth Shu-shen Geng, Regional Director – Southern China, New World China Land Ltd. “It’s a very exciting project embracing nature and protection of the environment, and integrating this with a relaxed and peaceful leisure and sporting lifestyle. You won’t see this anywhere else in China yet.

“Foshan is the cradle of Canton culture, and our Canton First name is a reflection of our desire to see the culture – and the city – flourish internationally long into the future.”

Canton First’s formula is to encourage the beauty of nature and wildlife wherever possible, reduce the impact on the environment and create a soothing haven of peace and tranquility. World-renowned golf course architect Tony Cashmore was brought in to apply this formula to the renovation of Foshan Golf Club.

“We set about creating a flagship championship course with a strong focus on native grass and shrubs,” said Cashmore. “I’m delighted to say that Foshan Golf Club is a glorious layout, very natural in its character and very beautiful in its setting.”

Together with the pre-qualifying tournament held for the country’s leading amateurs, the Foshan Open is the first event of its kind in Guangdong.

Golf club operator Get Golfing has announced the termination of its lease of Oak Park Golf Club in Surrey after failing to renegotiate terms with the club's landlords.