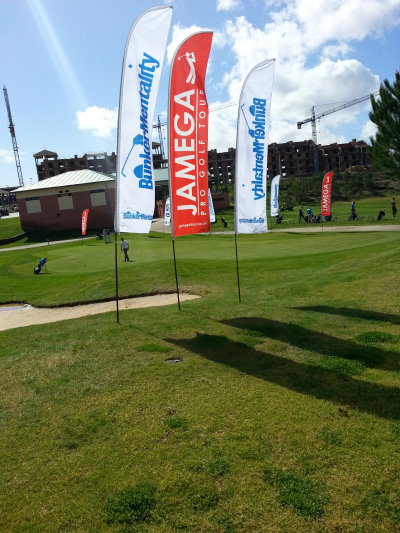 The Bunker Mentality sponsorship agreement will provide several prizes to players through out the season. The Jamega Pro Tour has 27 events planned for this year in the UK, and 5 across Portugal and Spain. The leading pro at the end of every month will receive the equivalant of a golfing ‘yellow jersey’ by being awarded Bunker Mentalty clothing. The season’s order of merit winner will receive the opportunity to become a brand ambassador for Bunker Mentality along with a one year clothing contract.

Bunker Mentality’s Robert Hart said: “We met with the guys from Jamega and were impressed with the scope and organisation of the tour. We found that both brands shared similar beliefs and values. We immediately recognised the opportunity offered, leading to the exciting agreement to become official clothing sponsor for the Jamega Tour for the next three years. This will continue to allow us direct contact with professional golf in a meaningful and regular basis.”

Gary Harris Director of the Jamega Pro Tour said: “Following a successful start to the year where we added a Spanish/Portugese Swing to the Jamega Tour, we are delighted to team up with Bunker Mentality as our official clothing sponsor for the next three years. The Jamega Tour is about recreating competitive professional events and we feel a perfect fit with Bunker Mentality as they represent what modern golf is all about.”

Bunker Mentality is a golf brand for golfers with a love of the great game and an individual personality, people who are keen to create new traditions in golf.