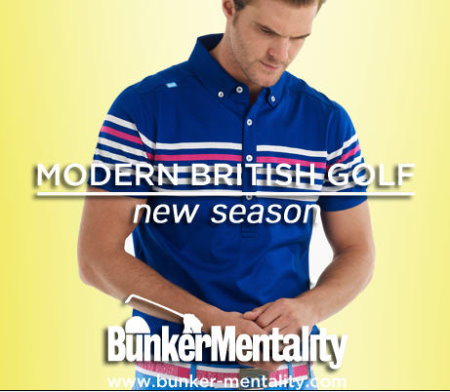 The Lee Westwood Golf Tour announces that Bunker Mentality has agreed to sponsor a series of prizes for this year.

Lee Westwood Golf Tour national final winners will receive clothing and caps from Bunker Mentality. Their clothing is designed for the modern golfer, with style, taste and personality – something the players will love.

“It’s great to have Bunkered Mentality supporting the tour players this year, their modern clothing is highly regarded and the players will like what they can win,” said Lee Westwood Golf Tour manager, Stuart Blair.

Robert Hart, Creative Director at Bunker Mentality, said: “We are delighted to be working with the LWGT.  The road to playing on the big tour is a challenging one and the LWGT gives young players a taste of what lies ahead. As a brand Bunker Mentality has always supported young ambitious golfers but working with LWGT will allow us to help in a real meaningful way.”

For your opportunity to win Bunker Mentality clothing, caps and accessories, you will need to be playing on the Lee Westwood Golf Tour with its 12 tour areas providing 72 events to choose from in 2014. The Tour gives up-and-coming players the chance to compete in a national competition without a handicap ballot, providing fantastic golf courses to compete on and also preparing players for a life on tour.

“Lee Westwood is planning to attend the National finals this year, while the overall tour winner will get the opportunity to visit Lee’s GolfSchool in Florida. That, coupled with prizes from sponsors such as Bunker Mentality provides an exciting climax to the tour season,” said General Manager Gavin Hamlyn.