Four home grown stars are among the latest to be confirmed in the field for the British Masters supported by Sky Sports, which takes place at Close House from September 28-October 1. 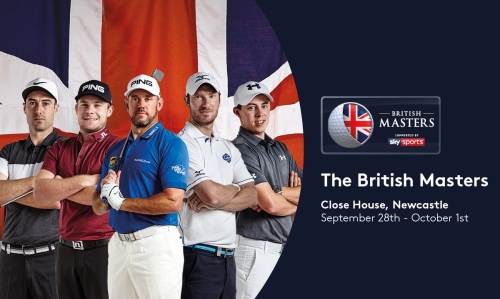 Matthew Fitzpatrick, who claimed his maiden European Tour title at this event in 2015, will tee it up alongside World Number 28 Tyrrell Hatton, 2016 BMW PGA Champion Chris Wood, and five-time European Tour winner Ross Fisher, when they join tournament host Lee Westwood next month in Northumberland.

Westwood, who has been attached to Close House since 2011, follows Ian Poulter and Luke Donald in the role of tournament host and is delighted to have Fitzpatrick, Hatton, Wood and Fisher join him in Newcastle.

“Everyone knows how important this tournament at Close House is to me, so to have the support of some of the best British golfers on home soil is appreciated, and it will really help to make it a very special tournament for the fans,” said the 23-time European Tour winner.

“I’m sure they will all enjoy the support they receive from our golf fans in the North-East and with more players to be confirmed before the tournament kicks off, everything is shaping up nicely for a great week.”

Fitzpatrick, winner of the event in 2015, will be looking to invoke the same form that saw him claim his maiden European Tour title at Woburn with a wire-to-wire victory over Shane Lowry and Fabrizio Zanotti.

“Even though I have only played this event the past two years, it obviously brings back a lot of great memories from when I won, so I am definitely looking forward to joining Lee at Close House,” said the 22 year old.

Hatton, who finished tied ninth last year at the British Masters, claimed his first victory on British soil when he went on to win the Alfred Dunhill Links Championship, and has since rocketed up the Official World Golf Rankings.

“It’s a great event to play and I love being back home with my family and friends,” said the 25 year old. I’ve finished tied ninth last year and 13th in 2015, so I would love to be in contention on Sunday afternoon in front of the British fans.”

Wood, who made his Ryder Cup debut last year at Hazeltine National alongside Westwood and Fitzpatrick, is looking forward to playing on home soil once again as he looks to add another British victory to his tally.

“It meant a lot winning the BMW PGA Championship on home soil in front of my family and friends, so it would be great to contend for another title at the British Masters,” he said.

Meanwhile Fisher, a Ryder Cup teammate of Westwood in 2010, has been one of the most consistent performers on the European Tour this season and will be looking to add another title to his name when he heads to Newcastle in September.

“It’s great to come home and play in front of the golf fans we have here in Britain because you always have that extra bit of support which definitely goes a long way,” he said.

“I’ve heard good things about Close House and I know that Lee will be a great tournament host this year, as were Ian and Luke previously, so I’m excited to get out there and hopefully play some entertaining golf for the fans.”

To see some of the world’s best golfer golfers in action at the British Masters supported by Sky Sports at Close House from September 28-October 1, click here.

For further information or to request a brochure call 01344 840 681 email enquiries@europeantourhospitality.com .