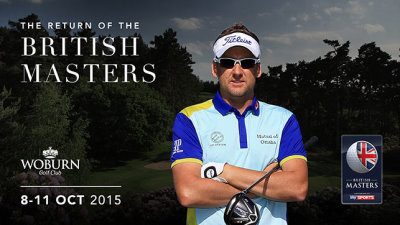 The British Masters supported by Sky Sports will return to The European Tour International Schedule for the first time in seven years in 2015, with a quartet of Britain’s leading golfers rotating as the tournament host over the next four seasons.

As a presenting sponsor of a European Tour event for the first time, Sky Sports will work with The European Tour and its leading players to engage and excite new and existing golf fans through its on-air coverage, promotion and staging of the event.

Ryder Cup players Luke Donald, Ian Poulter, Justin Rose and Lee Westwood will each take it in turn to host the prestigious tournament, last played in 2008, and will help to select the venue each year.

First to assume the role will be 12-time European Tour winner Poulter, who will take the British Masters back to Woburn Golf Club – the club with which he has a long-term association – from  8-11 October 2015, increasing the number of Race to Dubai events on British soil this year to six.

It will be the 17th time that Woburn Golf Club has hosted the British Masters and the first occasion since 2002, the year that Poulter and his close friend Rose memorably battled it out for the title, with Rose prevailing by a single stroke following a closing round of 65.

That enthralling contest took place over the Marquess Course, one of Woburn Golf Club’s three layouts, which will again host the tournament in October. The event will be staged and promoted by The European Tour and will have a prize fund of £3 million.

Sky Sports will help encourage interest in golf through its coverage of the British Masters including programming aimed at new fans across TV, online, digital media and social media outlets. Three-time European Tour winner Nick Dougherty has agreed to become an Ambassador for Sky Academy, a role which includes taking part in Sky Sports Living for Sport, part of Sky Academy, which uses sports stars and sports skills to help young people gain skills and self-belief.

Poulter said: “It is fantastic news that the British Masters is back on The European Tour schedule and I am proud and delighted to be bringing the tournament to Woburn Golf Club, which is obviously a place that means a great deal to me.

“British golf has been in a good place for a number of years now with the success we have had internationally, and as players we have all been keen to get more tournaments on British soil, and in England in particular, so we are grateful to Sky Sports and The European Tour for helping to make this happen.

“As a young boy I dreamed of becoming a professional golfer, and being able to watch my heroes play the game inspired me to chase these dreams.  I am now passionate myself about encouraging young people to try to enjoy this game that I love so much, and I’m looking forward to working closely with Sky Sports and The European Tour on staging the British Masters at Woburn and making it an event that truly inspires young people.

“I know Woburn is going to be a great venue for a European Tour event having hosted the British Masters previously, and I’m sure the fans will come out and really support the event again.

“The British Masters was always one of our leading events and I have some great memories of my battle with Justin at Woburn back in 2002. He’s obviously a good friend of mine and a great competitor, so it was a pleasure to go up against him at my home course. Hopefully I can put my local knowledge to good use once more and be up there challenging again this year.”

George O’Grady, Chief Executive of The European Tour, said: “The British Masters was an important fixture on The European Tour International Schedule from the Tour’s formation in 1972 through to its most recent staging in 2008, so we are naturally delighted it is returning to The Race to Dubai in 2015.

“We are confident that it will prove once again to be a very popular tournament among players and spectators alike, and we are very grateful to Sky Sports, our main broadcast partner, for helping to enable this through their support of the event.

“Having four of our top players and leading ambassadors – Luke Donald, Ian Poulter, Justin Rose and Lee Westwood – take on the role of tournament host will also help raise the profile of the event on its return to our calendar, and underlines the appetite among our membership for tournament golf in Britain. I am sure these players, and this tournament, will help inspire a new generation of fans to engage with golf and take up the game in Britain.

“It also further highlights the increased contribution our players are prepared to offer our events, following Rory McIlroy supporting the Irish Open and Paul Lawrie giving his name to our new match play event in Scotland.”

Barney Francis, Managing Director of Sky Sports, said: “As the home of televised golf, we are proud to take our commitment to the next level by bringing back the British Masters.  We hope that the support and investment of Sky Sports will make the tournament popular with new and existing golf fans both at Woburn and at home.”

His Grace, the Duke of Bedford, owner of Woburn Golf Club, said: “My family and the members of Woburn Golf Club are delighted that the British Masters is returning to Woburn.  Our Tournament Professional, Ian Poulter, has been a great ambassador for the club since 2003 and will be a perfect host for what will undoubtedly be a very exciting week, adding further to our tournament history of which we are so proud.”

Woburn Golf Club has also hosted the Travis Perkins Masters on the European Senior Tour since 2001, with Colin Montgomerie, the British Masters champion in 1998, winning the last two editions, played over the Duke’s Course.