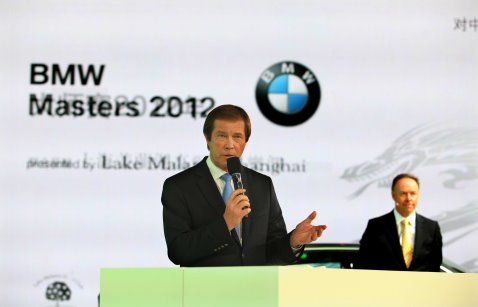 As of this season, BMW will present the golfing world with another highlight – the BMW Masters. Led by world number one Rory McIlroy, the sport’s top stars will assemble at Shanghai’s Lake Malaren Golf Club from 25th to 28th October, where they will fight it out for a share of the seven million dollar prize purse. Dr. Ian Robertson, Member of the Board of Management of BMW AG, Marketing and Sales, made the announcement at the Beijing Auto Show on Monday afternoon.

“As the name indicates, the BMW Masters will play a particularly significant role in BMW’s commitment to the sport as a ‘Global Golf Player’,” said Robertson, introducing the concept of the tournament. “The BMW Masters is another highlight in our sustainable global golf strategy.Chinais a key market for BMW and golf is the ideal stage, on which to present our claim of dynamics and precision. We are delighted to be able to offer our customers and spectators from throughoutAsiaa top-class event – both in terms of the sport on offer and the overall visitor experience.”

The BMW Masters will take its place on the European Tour calendar and, after the Majors, World Golf Championships and the season finale inDubai, will be the most lucrative event on the Tour. The exclusive field will consist of about 78 players, the majority of whom feature in the top 100 in the world ranking list. The remaining start places will be taken four players invited directly by the organisers and a 14-man contingent from the Chinese Golf Association (CGA), with whom BMW is cooperating on the organisation of the tournament.

BMW was one of the first brands in the world to promote and encourage the growing enthusiasm for the sport inAsia. In 2001 the company responded to the growth in popularity by organising a professional tournament: the BMW Asian Open, which was also held in Shanghai. After 2008, BMW temporarily focussed its commitment to Asian golf on other areas, including many “Official Car” sponsorships.

George O’Grady, Chief Executive of the European Tour, also expressed his delight at the new BMW commitment. He said: “We are proud of many partnerships we enjoy across the world of golf, but one of the most enduring is with BMW for whom this tournament represents the third title sponsorship on The European Tour in 2012, and the 45th in total over the past 23 years since the first BMW International Open in  Munich in 1989.

“BMW is renowned for its commitment to innovation and exceptional standards of excellence in promoting professional golf tournaments, and the visit to Lake Malaren Golf Club inShanghaiin October will once again underline that fact. Additionally, the European Tour has always been made to feel so welcome by the China Golf Association with whom we also have a strong committed partnership.”

Zhang Xiao-ning thanked BMW for its involvements in all areas. “We admire the outstanding vision and shrewd market investment of BMW Group. The BMW Masters will play a positive role in promoting the popularization and development of the world andChinagolf games, as well as taking the competitiveness of golf to a new level. At the same time, I hope all the contestants to present the charisma of golf for the fans giving their best performances.”

The BMW Masters will be played on a course designed by golfing legend Jack Nicklaus, which received rave reviews when it was used for a major tournament for the first time last year.

As well as the BMW Masters, BMW’s long-term commitment to the European Tour also includes the role of organiser at the series’ flagship event, the BMW PGA Championship, and the BMW International Open. In theUSA, BMW stages one of the most important play-off tournaments on the PGA TOUR, in the form of the BMW Championship. In addition, the company also supports the sport of golf with over 20 “Official Car” partnerships, its involvement in the Ryder Cup, and the organisation of the world’s largest amateur series – the BMW Golf Cup International.