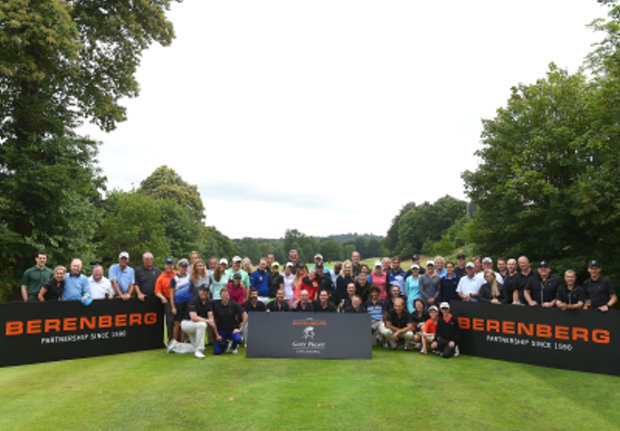 The Berenberg Gary Player Invitational concluded in style and further affirmed the union of golf and giving in what has been an extra special year for the event. This year the Black Knight has been celebrating the 50th anniversary of his career Grand Slam and his 80th Birthday, whilst title sponsor Berenberg celebrates their 425th anniversary.

The 2015 event embraced such a historic time by gathering together the biggest names in golf, business and entertainment at London’s Wentworth Club despite clashing with the extended Open Championship. Professional golfers and participants alike joined in the fun and giving during a gala auction after the day’s play and later Gary Player, The Player Foundation and presenting sponsor Berenberg donated a significant contribution during the Gala Dinner. This all culminated in raising more than $225,000 for DepaulUK, a charity that works tirelessly to prevent youth homelessness.

The winner of this first leg of the global invitational series, was won by the team of professional golfers Ian Woosnam and Georgia Hall along with businessmen James Grigg and Robert Baur.

An all-star field gathered for this year’s Berenberg Gary Player Invitational which included eight-time Major winner and legend of the game Tom Watson, who had travelled down to the event following playing in his last ever Open Championship at St Andrews.

Many other top players including Padraig Harrington, David Howell, Hunter Mahan, Charl Schwartzel and Marc O’Meara were also due to make the same journey to the event but were unable to do so following the unusual extension of this year’s Open Championship. The same goes for Marc Leishman, Zach Johnson and Louis Oosthuizen who unbelievably battled it out in a playoff with Johnson claiming the famous Claret Jug.

Past Major Champions Tom Lehman, Sandy Lyle and Mark Calcavecchia along with leading Tour players Robert Rock, Rich Beem, Oliver Fisher and George Coetzee all made last minute switches in their busy diaries to ensure a full field for the Berenberg Gary Player Invitational despite the historic Open Championship changes.

Gary Player said: “I am really thrilled about what has happened here today. The support we have received by all our participants as well as some of the world’s leading golfers, celebrities and businessmen are out of this world despite the dramatic challenges from this year’s Open Championship. I send my personal congratulations to Zach Johnson who was in fact due to play with us today. It’s the only excuse I would have accepted from him for missing our event. I feel very humbled by everyone’s efforts in such a special year for the event and I am delighted about the money raised.

“Following my visit to DePaulUK’s London-based Willesden Hostel, a long-stay hostel providing for young homeless people, I can tell you first hand what a difference it makes. The money raised here today provides young people in need with secure accommodation and assistance that helps them effectively develop life skills and establish a routine in their lives, something which most of us take for granted each day. Thank you to all.”

Dr. Hans-Walter Peters, Managing Partner at Berenberg, commented, “Every year is special when it comes down to the Berenberg Gary Player Invitational, as we raise money for those most in need. Yet it has to be said that this year really has been extra special.

“Gary Player does so much for so many people. It was fantastic we could honour his 50th career Grand Slam anniversary and 80th birthday in the same year we celebrate our 425th anniversary by bringing so many stars together to raise this vast amount of money for DePaulUK. It feels like the right time to all stand back for a moment and truly appreciate the incredible contribution Gary Player makes to golf and charity as he helps others around the globe. We stand incredibly proud today.”

Marc Player, CEO of Black Knight International and GPI series founder, added, “We are most appreciative to all our sponsors who aid in creating a brighter future in London and for people around the globe. Add to that the incredible support from our all-star line-up of professional golfers, entertainers and business people and it results in one of the best events for Black Knight International and the celebration of golf and giving.”

The Berenberg Gary Player Invitational is part of the world-leading charity golf event series, which has raised more than $60 million for charities worldwide. The next stop will take the Grand Slam champion to the Berenberg Gary Player Invitational at GlenArbor in New York on 11th and 12th October. This tournament will be followed by another event in Shanghai, China, on 1st and 2nd November before the series concludes in Sun City, South Africa, on 12th – 15th November.