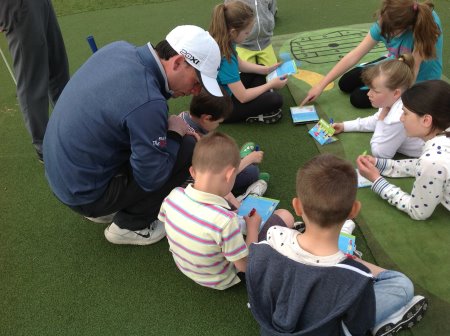 The Golf Foundation has thanked members of the British Golf Industry Association (BGIA) for a pledged donation of £12,000, raised during the BGIA’s recent annual golf day, held at Woburn Golf Club.

The leading golf charity will utilise the funds for its HSBC Golf Roots programme which reaches boys and girls through golf in schools, communities and golf clubs. Offering them the technical skills to play the game and additional ‘Skills for Life’, the programme creates a pathway to golf at club level. Young people from different backgrounds and abilities are being prepared for regular play through coaching from PGA Professionals using the charity’s Junior Golf Passport, which is endorsed by the Professional Golfers’ Association.

The donation from the BGIA will be an important addition to the fundraising requirement of the Golf Foundation, which needs to raise £3 million per year to deliver its strategy and help the golf development bodies of England, Scotland and Wales to grow the game.

The Golf Foundation was also delighted to meet up with the management team at Woburn Golf Club, which provided excellent facilities for all those taking part. Woburn has been a great friend to the Foundation and has raised thousands of pounds for the charity in recent years by asking club members to make a £2 donation as part of their individual annual subscriptions.

Chief Executive Mike Round said: “This was an excellent event which enabled us to spread the message to the golf industry of the importance of HSBC Golf Roots. The BGIA is showing its genuine support to back a programme which plays a key role in bringing on the next generation of golfers and thus protects the golf industry for the future.”

Mike Round has also praised recently a number of individual companies which have chosen to become formal supporters of the charity, and he hoped more firms would now value such a relationship in the near future, and demonstrate their own support of junior grass roots golf.