Andrea Pavan, 21, was born and raised in Rome, where his love of golf began. After an impressive amateur career, he finished 5th on the R&A’s World Amateur Rankings, 2nd on the EGA’s European Amateur Rankings, and 1st on the Italian National Rankings.  Having shone on the World stage as an amateur golfer, he has now turned professional following his participation in the recent World Amateur Team Championships in Argentina. 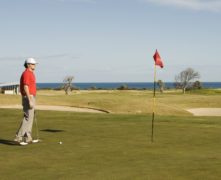 Andrea, who in December graduated from University in the USA, has recorded impressive results both through his college career and across Europe.  At University, he was a first team All-American in 2010 and also a winner of numerous league championships.  In 2009 he was a member of the team that won the NCAA Championship, the most prestigious event in US college golf.

Outside of the US, Andrea was a member of Team Europe to play for the Jacques Leglise Trophy from 2004-2006, and again for the St. Andrews Trophy in 2008.  He was a member of the European Team that took on the USA for the Palmer Cup in both 2009 & 2010, a quarter-finalist at the British Amateur Championship in 2008 & 2010, and was runner up at the European Amateur Championships in 2010.

Through the sponsorship by San Domenico Golf, Andrea Pavan will be an ambassador for the renowned championship golf course in Puglia and the Hotel group as he travels across the globe pursuing his golfing career.  The 18-hole San Domenico Golf course hosts a number of international tournaments throughout the year including the grand final of the European Challenge Tour in October each year and is considered to be one of the most prestigious courses in the Mediterranean.