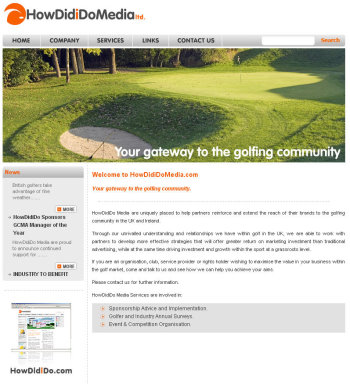 A total of 32 amateur club golfers from across the UK and Ireland head off to Portugal this week to enjoy some welcome sunshine and to compete in the grand final of the 2013 HowDidiDo National Matchplay Championship (February 9-15).

The participants include the reigning mixed pairs champions, Eileen McMullan and Gary Catt, from Richmond, Yorkshire, who will be looking to defend the title they worked so hard to claim last year; Carly Bosher and Laura Watkins, members at Bicester GC, who became the first ladies pair in the history of the competition to qualify for the grand final, via their regional final at Macdonald Botley Park Hotel Golf & Spa, Southampton; and 10-handicapper Chris Wall, from Middlesbrough GC, who is looking to regain the singles title he last won in 2011.

Four competitions culminate in the grand final at the world-class Quinta do Lago resort, on the Algarve – singles, pairs, mixed pairs and senior pairs, for those aged 50 or more – with a total of 32 golfers, from across the UK & I, fighting it out for the titles. Each finalist will have played up to four qualifying rounds merely to reach the regional final, with the knockout rounds taking place between June and September, and the regional finals in October.

Having qualified for the grand final, the 32 golfers receive an expenses-paid trip to play at Quinta do Lago, including complimentary return flights to Faro, six-nights’ accommodation at the stunning, four-star Monte da Quinta Club, on the Quinta do Lago estate, and five days’ golf on the renowned South and Laranjal courses, with all of the prestigious HowDidiDo National Matchplay titles up for grabs.

All of the competitors battled their way through at least four local rounds and a regional final during 2013, to reach the grand final of a competition which is open to anybody who is a member of an affiliated club with an officially recognised handicap. And this year’s event achieved a staggering number of entries with more than 1,400 golfers starting out in the early rounds before the four regional finals in October last year.

Barry Dyett, managing director of HowDidiDo Media, said: “The culmination of the annual HowDidiDo National Matchplay Championship is always a fabulous week for all involved. It’s heartening for the organisers to see how much it means to those participating, but also how much fun they have and how quickly they make new friends while they’re out at the final.

“Many of our previous finalists have kept in touch and meet up annually for a round of golf now. From our perspective it’s great to be able to offer ordinary club golfers the opportunity to stay and play in genuine world-class venues – particularly at this time of year when the sunshine is welcome respite from the weather we’re experiencing currently, and which is actually restricting the golf many of them can play.

“Under normal circumstances of course, club golfers from Scotland wouldn’t generally get the opportunity to compete against club golfers from Wales or the south of England, so it’s a great experience for all of us. We’re all really looking forward to it … and the sunshine of course!”

HowDidiDo’s database now holds in excess of 21 million rounds of golf along with the handicaps, results and scores of more than 1,300,000 UK golf club members. It is now arguably the largest and most up-to-date database of golfers in Europe.

What’s more, the brand is also the driving force behind two of the best supported amateur golf events in the UK: the annual Titleist Order of Merit – the largest golf event of its kind in the country – and the HowDidiDo National Matchplay Championship.

It is also currently engaged in a widespread campaign with the BOSS Watches H1 Club to reward all its registered golfers with a luxury timepiece should they record a hole-in-one during an official club competition. Since the programme launched in April 2013, more than 2,600 HowDidiDo golfers have already received a limited-edition watch worth £225.

Daily updates from the competition will be available at www.golftournamentsltd.com.