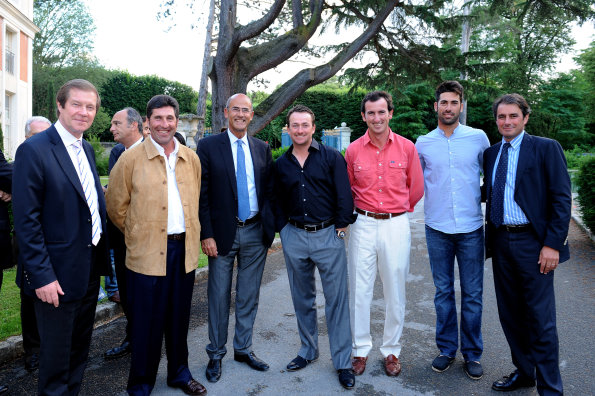 Alstom, the French power and rail transport infrastructure giant, has extended its sponsorship of the Alstom Open de France for a further four years, taking the tournament through to its centenary edition in 2016.

George O’Grady, Chief Executive of The European Tour, and Patrick Kron, CEO of Alstom, made the announcement at a reception at the Trianon Palace inVersailles on Friday night following the second round of the tournament at Le Golf National, host venue for The 2018 Ryder Cup.

Alstom has been title sponsor of the Open de France since 2006 and the new four year agreement continues its association with continental Europe’s oldest and richest national Open through to the landmark 100th edition.

First played in 1906, the tournament was not staged during the war years of 1915-19 and 1940-45, but has produced some notable champions in the modern era, including four-time winner Seve Ballesteros, Sir Nick Faldo, Retief Goosen, Martin Kaymer, Bernhard Langer, Sandy Lyle, Greg Norman, Colin Montgomerie and José María Olazábal.

Patrick Kron said: “Alstom has been supporting the French Open – now the Alstom Open de France – for seven years, helping to strengthen its position as one of the most renowned golf tournaments.

“To succeed in this challenge we have worked closely with all our partners. The decision to organise the 42nd edition of The Ryder Cup in France in 2018 is one of our common achievements. Our success is also illustrated by our 800 guests from 400 countries around the world and 1,000 Alstom shareholders and employees who are present at this year’s Alstom Open de France. We therefore consider that it was a natural step forward to maintain our support from 2013 onwards.”

O’Grady said: “The Alstom Open de France is one of the oldest and most prestigious tournaments on The European Tour International Schedule and we are delighted that Alstom will continue as title sponsor for a further four years, taking us through to the 100th edition in 2016.

“This is a historic period in the development of French golf following last year’s announcement that Le Golf National will host The Ryder Cup in six years’ time, and the Alstom Open de France will undoubtedly play a hugely significant role in the build-up to 2018.

“Alstom’s continued sponsorship is therefore vital and we are extremely grateful to Patrick and his team for their magnificent support. We also salute the vision of Georges Barbaret and his unique stewardship of the French Golf Federation and Yann Le Moenner from ASO for their long-standing partnership in promoting this event.”

Georges Barbaret, President of the French Golf Federation, said: “The Open de France is the keystone of our sporting strategy. The commitment of Alstom as the title sponsor of the event guarantees the continuation of our development at the highest level. Our ambitions are big and this announcement makes me happy and confident for the future.”

Jean-Etienne Amaury, president of ASO, said: “I am very happy with the extension of the title sponsorship by Alstom. I feel proud of it for it is a positive signal for the development of the game of golf inFranceand of this event in particular.

“The Alstom Open de France attracts some 50,000 spectators each year and has a prize purse of more than €3,000,000, meaning we attract top international players, such as Martin Kaymer, Lee Westwood, Justin Rose and Graeme McDowell. This is an excellent omen for the future of our sport, with The 2018 Ryder Cup in mind.”

Olazábal, the 2012 European Ryder Cup Captain and winner of the Alstom Open de France in 2001, welcomed the announcement on behalf of The European Tour Members.

He said: “The Alstom Open de France is one of the oldest and most respected tournaments on our schedule. Today’s announcement that Alstom will continue for another four years is wonderful news for The European Tour and all our players. Thank you Patrick and all your colleagues at Alstom for making such a very important commitment, despite the difficult economic situation we are all experiencing. We really appreciate your support.”