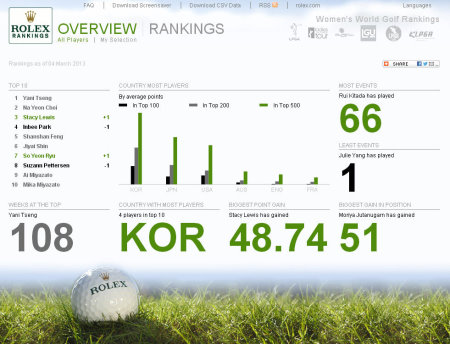 For the first time since the Rolex Women’s World Golf Rankings was launched in 2006, the official women’s golf rankings system is adding two global tours. The China LPGA Tour and LET Access Series will now be incorporated in efforts to reflect the ever-expanding state of women’s golf around the world. The addition will also create more opportunity for professional golfers worldwide to qualify for the 2016 Olympics.

Both tours will begin accumulating points this month as their tournament schedules commence. The China LPGA Tour (CLPGA) features a 12-event season with tournaments across Greater China regions where 227 of its members will have the opportunity to accrue performance points.

“We are very excited to be a part of the Rolex World Ranking community,” said TK Pan, chairman of the CLPGA Tour. “The China LPGA Tour and its players would like to thank all the committee members in supporting women professional golfers in the Greater China regions where the fastest growing golf tournament fans in the world reside. Operating in the world’s second largest economy, the inclusion of our tour will no doubt give many players chances to earn world ranking points, a major step in the promotion of global women professional golfers and golf tournaments.”

“We are delighted to be invited to join the Rolex Women’s World Rankings,” said Di Barnard, LETAS Tour Director. “It is an important step for LETAS and a great opportunity for the players to be recognized on the global golf stage, which could set them on the path to the Olympic Games at Rio de Janeiro in 2016.”

The Rolex Rankings provide a unified and authoritative reference source to the relative performance of the world’s leading players. Developed at the May 2004 World Congress of Women’s Golf and managed by the Women’s World Golf Rankings board, the first-ever world rankings system was then sanctioned by the five major women’s professional golf Tours: the LPGA; LET; JLPGA; KLPGA; ALPG; as well as the Symetra Tour and the LGU.

Now, the Rolex Women’s World Golf Rankings will consider eight tours. The official events from each tour will be taken into account and points will be awarded according to the home tour and world strength of field.