Staged as the glittering finale to the PGAs of Europe’s annual week of highlights, including the 22nd Annual Congress and the International Team Championship (ITC) supported by Glenmuir, Associaçäo Turismo do Algarve, Ryder Cup European Development Trust and Rolex, the awards ceremonies were carried out at the Tivoli Marina Hotel, Vilamoura in a gathering of players, delegates and industry representatives from 31 countries and across four continents.

Officials from the length and breadth of Europe and from the PGAs of America,Canada,AustraliaandSouth Africawere there to seeFrancereceive the ITC trophy, and prize money, and six other important awards presented.

A new PGAs of Europe award, introduced to acknowledge the work of a  project that has excelled in developing the game, was won by the The Open 2011 Legacy Development Project.

Along with the English Golf Union a whole battery of organisations including the English Women’s Golf Association, the PGA, the  R&A, the Kent Golf Partnership, Kent Sport leisure & Olympics, the Golf Foundation, England Golf, affiliated clubs, local coaches and voluntary organizations contributed to the wide-reaching scheme.

The nomination for it stated “The Open 2011 Legacy combined all strands of golf development through the active partnering of local and national organisations. The key objectives were to increase beginner participation levels… to lower the age demographic for golf volunteering inEngland… and to attach it all to a global sporting event.”

Under this remit the remarkable level of participation achieved included: 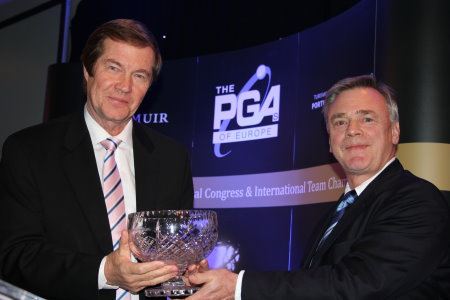 George O’Grady, chief executive of the European Tour was presented with the PGAs of Europe’s Christer Lindberg Bowl.

Now, the third of them has been, like his two predecessors, honoured with the award named after the PGAs of Europe’s first president and chairman for his outstanding services to our sport.   He joined The European Tour in 1974 as a Tournament Administrator and subsequently Tournament Director. He was Chief Referee at The Ryder Cup at Royal Lytham and St Annes in 1977 and Staging Director for The Ryder Cup in 1981, 1985 and 1989.

In 1984 he launched the development of the Tour’s commercial arm with the formation of European Tour Enterprises, of which he was appointed Managing Director.  In 1986, he was responsible for founding the Tour’s Benevolent Trust which distributes funds for worthy causes.

Together with Ken Schofield, he launched the European Seniors Tour with the first staging of the Senior British Open, and developed the Tour’s non-network television policy in 1987 in a joint venture with Trans World International. This policy became formalised with the creation in 1991 of European Tour Productions, the Tour’s television arm of which he is Joint Managing Director.

The presentation was performed by Ken Schofield who talked warmly and admiringly about his successors many outstanding attributes. 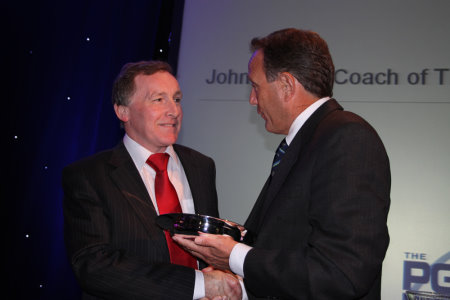 Michael Bannon, coach to World No.2 golfer, Rory McIlroy, was presented with the PGAs of Europe’s John Jacobs Coach of the Year Award at the association’s Annual Awards Dinner at the Tivoli Marina Hotel, Vilamoura on Portugal’s sun-kissed Algarve coast supported by Rolex.

Staged as the glittering finale to the PGAs of Europe’s annual week of highlights, including the 22nd Annual Congress and the International Team Championship (ITC) supported by Glenmuir, Associaçäo Turismo do Algarve, Ryder Cup European Development Trust and Rolex, the awards ceremonies were carried out in a gathering of players, delegates and industry representatives from up to 31 countries and across four continents.

Officials from the length and breadth of Europe and from the PGAs of America,Canada,AustraliaandSouth Africawere there to seeFrancereceive the ITC trophy, and prize money, and six other important awards presented.

Bannon, a close friend of the McIlroy family, has known Rory since he was an infant and has coached him from when he was eight years old, nurturing his talents through all the various phases of his career right up to victory in the US Open, 2011.

In the history of world golf there can have been few more dramatic examples of a player-coach partnership working together from the embryo stage right up to Major championship success, a World No.2 place and a future that seems certain to include unimaginable triumphs.

Bannon, a modest and likeable Irishman who regards his relationship with the phenomenon who is his charge as a working partnership, spoke of feeling humbled to be honoured in this manner before such a gathering of dignitaries and to be especially thrilled at receiving a trophy named after John Jacobs, his coaching role model whose lead was partly responsible for his specialising in that side of the sport.

His talent and achievements as a development coach, a talent coach and the coach of an elite player all came to fruition in 2011 to be recognised as the John Jacobs Coach of the Year. 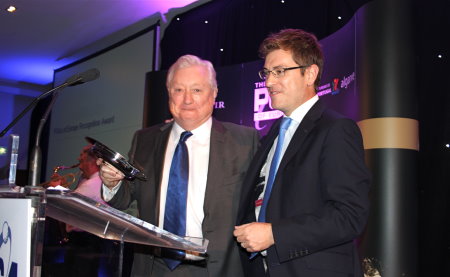 Dennis Shaw, media consultant to the association since 1998, and freelance golf  journalist for 15 years before that, was presented with the PGAs of Europe Recognition Award 2011.

Shaw has worked closely with the PGAs of Europe’s staff and directors over a thirteen year term. During this period the fledgling body, launched in 1990, gradually upgraded its communications policy from almost non-existent to the creation of a website, monthly newsletters, escalating coverage of a growing schedule of events, regular contributions to relevant publications around Europe, a service of press releases and a comprehensive social media presence.

“It’s been a question of being in the right place at the right time,” he said. “By sheer good fortune I was able to write, for The Times, the first-ever article about plans to launch an association of PGAs, when the pioneers met at Wentworth in 1989.

“This gave me an affinity with all that has happened since, helped by a further slice of good fortune when the association was seeking an experienced golfing journalist to report their affairs just as I retired as a football writer in 1998.

“What’s happened since, including the association becoming a Ryder Cup partner, has been an absolute pleasure to me. Maybe I should be saying ‘thank-you’, as well as the other way around, for having been embraced so warmly into the European golf community.”

Other awards presented were: