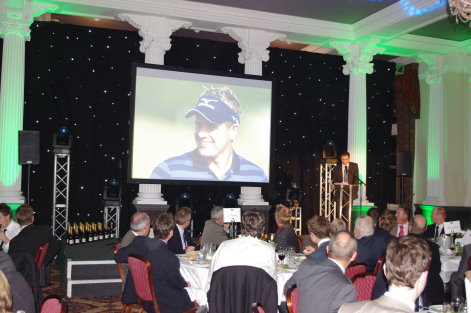 Over 200 Foremost members and suppliers were present at the event which took place on Monday 24th October 2011. Those who attended were treated to a fantastic spectacle, hosted by the voice of golf on the BBC, Andrew Cotter.

Manufacturers, Tour professionals and Foremost members were all honoured in the multi-purpose ceremony, designed to reward elite performers in a variety of categories.

Awards were distributed for ‘Champion Golfer of the Year’, ‘EMP Fantasy League Winner’ and the prestigious ‘Pro of the Year’.

An elated Maurice Campbell of Leighton Buzzard Golf Club picked up the sought-after prize for Foremost Professional of the Year:

“I can’t tell you how much this means. It’s an absolute honour to win this award, especially as Foremost have so many fantastic members to choose from.”

Foremost member professionals also honoured golf’s leading equipment suppliers in a series of awards, headlined by the high-status ‘Supplier of the Year’. This award was won byPING, remarkably, for the fourth year in a row.

18-year-old boy wonder Matteo Manassero scooped the breakthrough trophy for a stellar 2011 which culminated in victory at the Maybank Malaysian Open.

Open Champion Darren Clarke notched up another prize, claiming Shot of Year for his second to the seventh hole on the final day at Royal St George’s.

Finally, and perhaps unsurprisingly, World No.1 Luke Donald captured the ‘Player of the Year’ accolade for a devilishly consistent year.

Foremost Company Director, Andy Martin, spoke following the dinner: “It was an absolute pleasure to host the dinner for all our hard-working professionals. The feedback I’ve had has, quite frankly, blown me away.

“We’ve put an awful lot of hard work into this project and to see it all come to fruition, without even a minor glitch, was a fantastic feeling.”

Echoing Andy Martin’s sentiments, Foremost CEO, Paul Hedges, proclaimed: “This was an important evening for our professionals and for Foremost as a company. It’s very tough out there for our members at the moment, so it’s important that we reward them appropriately.

“I’d personally like to thank every attendee for making this a landmark evening for Foremost.”

Golf Monthly is the ‘Consumer Media Partner’ for this year’s Foremost Annual Awards and will be reporting on the event to its extensive national and international readership.

Golf Business Development (GBD) magazine is the ‘Golf Industry Media Partner’ for the successful event and will be showcasing all the winners and stories from the night in the next issue of the popular industry magazine.

Ben Evans, editor of GBD, said: “This Awards event was a superbly run evening by the Foremost team in front of a packed audience at a great venue. A mark of how important and prestigious this night has become came in the genuine delight shown by the award winners. When gritty industry professionals are clearly moved and feel honoured, you realise this is a very big night in the golf industry diary.”