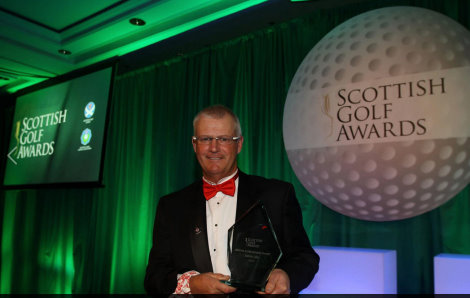 In the 25th anniversary year of his US Masters triumph at Augusta National, Sandy Lyle MBE spoke of his immense pride after receiving a Lifetime Achievement Award at the glittering 2013 Scottish Golf Awards at the Hilton Glasgow on Friday 1st March.

Before a sell-out crowd of almost 600 guests at the annual showpiece jointly-organised by the Scottish Golf Union and Scottish Ladies’ Golfing Association, the two-time Major champion received a richly-deserved standing ovation as he collected the final award of the night.

Lyle, who won The Open Championship at Royal St George’s in 1985 before making history by becoming the first Briton to claim the Green Jacket three years later, became one of the world’s leading golfers in the 1980s and is forever regarded as a member of Europe’s ‘Big Five’ during that era.

After amassing 30 professional wins and playing on five Ryder Cup sides, he was inducted into the World Golf Hall of Fame in 2012 and has now entered Scottish Golf’s equivalent, joining previous inductees Sam Torrance, Colin Montgomerie and Paul Lawrie.

“It was a wonderful night at the 2013 Scottish Golf Awards at the Hilton Glasgow,” said Lyle, 55.

“What an honour it was to receive a Lifetime Achievement Award in front of Scotland’s golf fans in Glasgow, so close to my family heritage in Milngavie. It was also wonderful to have my wife, Jolande, and four children present at the awards dinner.

“It really doesn’t seem like 25 years ago that I won at Augusta National, but it’s obviously a memory that will live with me forever.

“I’ve been lucky to have enjoyed a great career and it was nice to reflect on it in Glasgow. Well done to all the award winners and thank you to the Scottish Golf Union and the Scottish Ladies’ Golfing Association for organising a fantastic occasion.”

During a night to celebrate Scottish golf at all levels after a fantastic 12 months at amateur and professional level, Lyle was reacquainted with the Claret Jug and the Ryder Cup – among six trophies on show for dinner guests during a wonderful evening which raised thousands of pounds for junior golf in Scotland.

Lyle also presented Alford’s Laura Murray with the SLGA Ladies Order of Merit award, before accepting his own Lifetime Achievement accolade from another icon of the 1980s, the Scotland football manager Gordon Strachan.

Other famous personalities from across Scottish sport who gathered included Stephen Gallacher, the recent winner of the Omega Dubai Desert Classic, who presented the Amateur Golfer of the Year award to Jack McDonald of Kilmarnock (Barassie).

Among other awards presented on the night, Scotland’s victorious Men’s Home Internationals team won the fierce fight for Team of the Year, while Bradley Neil accepted the Boys’ Order of Merit title on behalf of his Team GB gold medal-winning team-mate Ewan Scott from St Andrews.

The awards also recognised the efforts of those involved at the grass roots level of the game, with the RBS Volunteer of the Year award going to Shirley Murray from Torvean, while Central region club Strathendrick triumphed in the RBS Junior Club of the Year.

Another St Andrews player, Lauren Whyte, the 2012 Scottish Girls champion, was also the second recipient of The Adam Hunter Award, created following the death in 2011 of the ex-European Tour player and coach. Stephen McAllister, a former close tour colleague of Hunter’s, was appropriately on hand to accept Whyte’s £500 grant towards her coaching and development.

Meanwhile, proceeds from the Jewson Long Putt Challenge went to Lyle’s nominated charity – The Brain Tumour Charity. On the day of Bandanas for Brain Tumours, Sandy and dinner guests donned bandanas for the second biggest Brain Research Charity in the world focussing on research.

PSP Media Group Ltd, organisers of the Scottish Golf Show, have hailed the first-ever virtual edition of the event a 'massive success', with over 6,700 log-ins during the course of the two-day show.