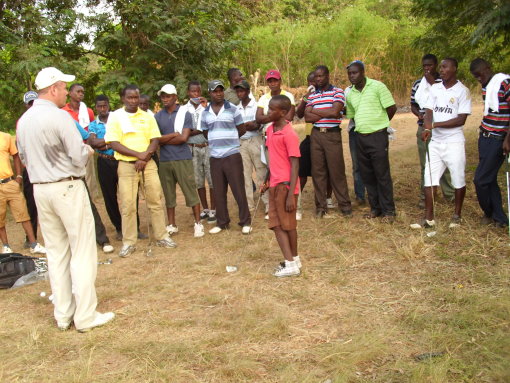 The ‘King of the Swing’, Gary Alliss has described the recent Golf Clinic at the Achimota Golf Club as hugely successful despite an incident of illness on his part a day before the final event. He noted that the training went well since participants’ knowledge from the previous year’s exercise had improved and were eager to learn more. When things are going pretty well, that’s the time to get better, writes Collins Oppong.

The Golf Clinic was under the auspices of the Ghana Golf Association and brought together Amateurs, Juniors and Professionals from across the country to learn some rudiments of the game. It took place between Monday 12 March and Friday 16 March. In all 33 Pros and 27 Juniors/Amateurs participated in the weeklong training.

According to Mr. B. B. K. Ayivor, Vice, President, Junior Golf Association, clubs that had their representatives at the clinic include, AGC, Celebrity Golf Club, Tafo Golf Club and Jaman Golf Club, The rest are Tarkwa Golf Club, Tema Country Golf Club, Obuasi Golf Club, Royal Golf Club and Beige Village. He explained that, the training was among other things aimed at enhancing the PGA Professionals Teaching Structure.

Hitting balls straighter and farther with fewer strokes remains the ideal wish of many golfers, to achieve this feat, Gary took participants through all aspects of how ball flights are created from the impact factors of clubface position, swing path direction, angle of approach at the hitting moment, centeredness of strike on the clubface and club head speed at impact.

Other areas covered were; diagnosing faults, building a model set-up and swing and finally tasks explanation and demonstration of aspects of short game and awkward lies. The outcome of the clinic was greeted with enthusiastic responses from participants as many described the various sessions as ‘outright brilliant’.

Having more understanding of the game generates less effort on the course and presents an added enjoyment. Gary Alliss has for the past 39 years as British PGA member and tutor helped to bridge many yawning gaps for countless golfers even if the exercise is just to fine-tune a golfer’s skills.

As PGA master Professional, Alliss has embarked on similar trips to teach growing golfing nations such as Slovakia and Israel.

Whiles in Ghana for the clinic, he observed that, the Pros and juniors have pretty good demonstrating skills and many of them could play well, he however fell short of underscoring the tendency thatGhanacan in the near future produce a golf gem for the world same way the nation had done in soccer. He explained that, desire on the part of the individual is vital, “one should not be afraid to go for it. If one breaks through many others may follow,” he continued, “being the first is tough”.

He nevertheless gave some indication of the way out, “This vision will happen from good teaching of fundamentals to Juniors, encouragement from the government and Golf Clubs, support from Club members and lastly having the facilities to train.” He however added upon reflection of the prevailing situation inGhanathat, “This last (concerns on facilities) is a challenge in Ghana”.

Sharing his views on how best to increase golf’s popularity and curtail some of the challenges in Ghana and Africa as a whole, he emphasized that, “there should be a conscious effort to get the professionals to work alongside the school PE teachers, and golf must also be regular on the school curriculum”. To prove how viable his suggestion is, he maintained that, “you don’t need more than say a football pitch to hit 9 iron shots.”

In display of a clear case of system contention, Alliss described as economic mistakes instances where too many championship courses are built at, as he referred, ‘wrong places’. He contended that, with priorities and good planning some resources could be channeled to “cities like Accra that just need a practice /teaching facility at a little cost as possible”.

Despite these seemingly shortfall, Aliss considered the game as undoubtedly one of the most popular games that employs millions of people worldwide. He added, “It is a game for your whole life unlike almost every other sport and can create a sense of accomplishment for the individual when you show enough passion for it.”