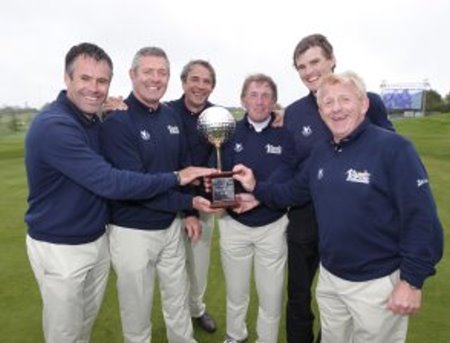 SPORTS MARKETING SUREYS INC., the official census partner of the European Tour, supported The Celebrity Cup at Golf Live by undertaking an equipment survey of the four national teams.

The golf ball count was a drawn-affair between Titleist and Srixon, and TaylorMade dominated the driver, fairway and iron count whilst Odyssey led the putter count and adidas the most worn shoe. However, there was also the time in the sun, or perhaps wind, for Scottish club manufacturer George Nicoll, shoes in play for Royal Albartross, a glove for Costco, and also heritage in an original PING Anser putter and a Callaway Heavenwood still in play.

James Goode, Event Director of Golf Live, commented: “As part of the interest for spectators, and fun for the team members, we wanted the players to enjoy some of the experiences faced by those on Tour, and the equipment census is one of them.”

As far as the debate on the use of long putters, only one was in play used by BBC football pundit and ex-Scotland football Captain, Alan Hansen.

SPORTS MARKETING SURVEYS INC. attend all events on the European Tour recording the equipment used from driver, thru’ hybrids, wedges & irons, to glove including collecting detail down to monitoring the make of grip. This enables the manufacturer to monitor and identify new players, the governing bodies to validate trends such as number of wedges, type of putter or hybrids in use, or brands to promote their usage. As well, as the European Tour, SPORTS MARKETING SURVEYS INC. undertake equipment census at leading cycling tour events amongst the core & avid competitor, and also the player equipment and apparel survey at The Wimbledon Championships – one of the iconic sporting events of the British sporting year.