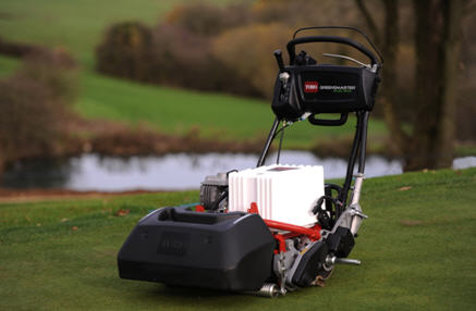 Brand new from Toro for 2012 is the Greensmaster eFlex, an all-electric pedestrian greensmower that boasts a unique lithium-ion battery for an unbeatable performance from a ‘greener’ power source. This also makes it Toro’s quietest greensmower ever.

Toro says that the inclusion of a lithium-ion battery – an industry first – provides a consistent performance over its five-year life expectancy and is capable of cutting up to nine greens on a single charge. What’s more, the battery can achieve a 96 percent charge in a mere four hours, allowing for double cutting during tournaments. Simply mow, charge and repeat – it couldn’t be easier!

Improved operator controls, including an automated ‘EZ-Turn’ feature, provide operators with even better control and comfort at all times. Fitted as standard, EZ-Turn is selected according to the user’s preferences and pace, and automatically slows the mower down at the end of a pass and speeds it up again on the return pass. The result is better control, less turf damage and a better overall cut.

Another innovation is the variable clip feature, which allows for six easily selectable clip options per cylinder type (comprising eight-, 11- or 14-blade options) – giving 18 distinct clip rates in all. This clever feature enables users to optimise the clip rate for the desired height of cut or playing conditions. The selected clip rate is accurate, repeatable, and means desired ball speed (or stimpmeter reading) can be easily achieved for a predictable and consistent putting surface on every green.

The eFlex’s advanced lithium-ion battery technology also powers an all-new belt-drive transmission, which drives both the traction and cylinder, and is designed to transfer power to where it’s most needed at any given time. And it’s thanks to this ‘greener’ power source that eFlex has earned Toro’s EnergySmart label. This concept cements Toro’s commitment to environmental sustainability, economic viability and social responsibility. (See note to editors, below.)

All this and the unsurpassed performance, productivity and quality of cut users expect from a Toro mower! Benefiting from the manufacturer’s patented ‘Flex’ suspension and available in both 18in/45.7cm or 21in/53.3cm cutting widths, eFlex walk mowers are engineered to deliver a consistent quality of cut. Importantly, the eFlex is also fitted with Toro’s Dual Precision Adjustment (DPA) cutting units as standard.

Thanks to their ingenious one-click dial, Toro’s famous DPA units allow users to adjust and hold the bedknife in exact increments for an unrivalled quality and consistency of cut. Popular among many of theUK’s top golf clubs, DPA blades hold a sharp edge for longer, ensuring that each blade of grass is cleanly cut – not torn – to keep the grass sward green and healthy.

Commenting on the launch of this revolutionary new mower, distributor LelyUK’s Toro national sales manager Jeff Anguige says: “We’re delighted to unveil our long-awaited electric pedestrian greensmower at Harrogate Week. Not only does the eFlex benefit from a unique lithium-ion battery source, but it also boasts several innovative features, such as EZ-Turn, which represent a real step forward in mower technology.

“We’re confident that golf resorts with a green policy in place will be particularly keen on the eFlex, thanks to its environmentally-friendly operation. It will also appeal to golf hotels looking for a quiet machine for use in the vicinity of guests’ rooms. And in terms of making long-term savings on fuel, it really can’t be beaten. It’s a key launch for us and we expect it to draw lots of interest at the show.”