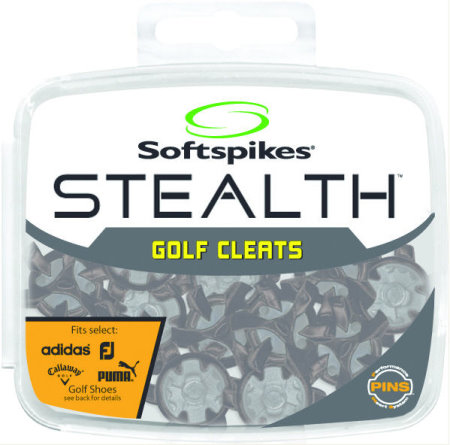 As featured in FootJoy’s new M:PROJECT model, Stealth will be released in PINS thread to golfers across Europe in 2013.

Stealth, available in Black/Silver, has been specifically engineered to combine with the low-profile shoe phenomenon to allow golfers to benefit from superior traction, stability and overall performance.

Softspikes’ PINS (Performance INsert System) was developed through years of exploration at the brands Research and Development Centre. Its development has allowed players to dramatically improve balance. The System places players closer to the ground which has been proven to improve ball-striking significantly and provide greater feedback.

The number-one cleat brand on Tour has also announced the release of the cleat debuted in FootJoy’s XPS-1 shoe.

Cyclone Ice features multi-material components with an ultra-advanced rotational design, envisioned to counteract undesirable forces at work during impact. Cyclone Ice is set to build on the overwhelmingly successful launch of Cyclone in 2012.

This cleat utilises the popular Fast Twist thread, which is the market leader in fixing systems.

Softspikes® are the number-one cleat brand on Tour, and possess an unmatched roster of products preferred by some the best golfers in the world. From Cyclone to the world’s first adjustable cleat, Black Widow Tour, the brand have been the pioneering brand in traction and comfort oriented golf cleats since they launched the first plastic cleat in 1993.

This week speakers, exhibitors, delegates, media representatives, academics, administrators, students and business advisers have traversed the globe and come together in the search for ‘golf’s new normal’