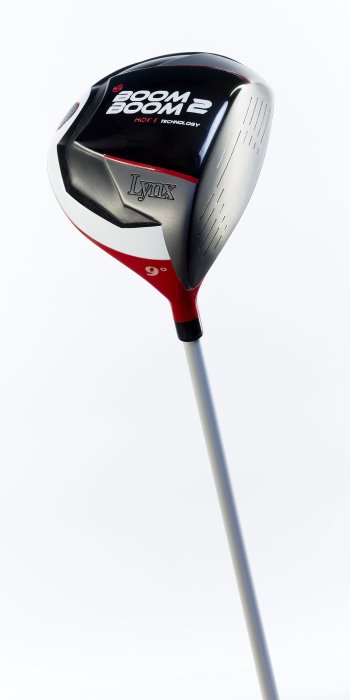 Lynx Golf continues to enhance its status as the most innovative equipment brand in golf with the unveiling of a new and improved version of its Boom Boom 2 Driver.

Several exciting design developments have been introduced which elevate the performance of the Boom Boom 2 V2 to match those of its predecessor – where a heated headcover could be used to generate jaw-dropping distance and forgiveness.

Now, the gas-filled Boom Boom 2 V2 delivers incredibly long and straight driving  with a conventional headcover, after Lynx’s product development team discovered ways to make the 100% legal club more powerful than ever before.

Said Lynx CEO Steve Elford: “During the development of our Boom Boom 2 fairway woods and rescue clubs, we discovered ways to improve the performance of the driver even more.

“We’ve injected more gas into the head and this itself has been fortified, so the club is not only stronger but it’s as ‘hot’ as its predecessor when it comes to distances.”

The original Boom Boom 2 was supplied with a battery-powered headcover which heated the gases in the head to ‘supercharge’ its performance.

While the club always conformed to R&A spec, the headcover was subsequently banned in competition golf and rather than challenge the ruling Lynx set about making  the latest version so ‘hot’ that it negated the need for the headcover.

Added Steve Elford: “Lynx is dedicated to innovation and we’ve gracefully accepted the R&A ruling about the heated headcover and moved on.

“As a brand, we will continue to push the boundaries of technology on behalf of the golfer – and this means we will always produce products that challenge the game’s governing bodies.

“We don’t want to follow the pack and produce products that are the same as everyone else, with very little  actual differentiation. Lynx is an innovator and, as such, we accept there will be times when our ideas mean organisations like the R&A will be presented with products they’ve never seen before.”

The Boom Boom 2 V2 is constructed from two types of titanium with Hot 1 Technology™ – whereby a rare mix of gases is injected into the head and invisibly sealed in, under pressure, creating outstanding performance while conforming to strict COR and CT clubmaking guidelines.

Unlike other drivers, the club face is given extra support from the inside by the thermodynamic nature of the gases.

This gaseous activity within the club head leads to perfectly-even support across the club face and therefore all ball-strikes off achieve low spin-rates and maximum distance – even when not struck from the sweet-spot.

The Boom Boom 2 V2 is priced £299 and is available with a high-grade Aldila Rip’d NV shaft in a range of flexes and regular legal headcover.