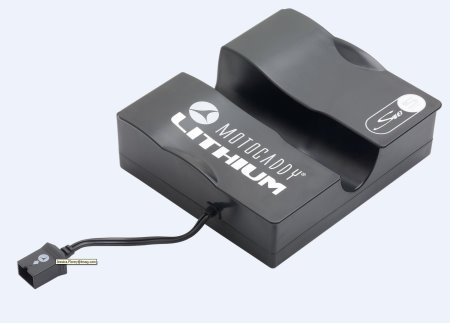 Motocaddy, the market-leading powered trolley brand, has launched an extensive promotional campaign to communicate the key benefits of lithium batteries and encourage more lead-acid battery owners to convert to lithium.

Trolleys powered by lithium batteries now account for more than one in four Motocaddy models purchased and the new‘Time To Go Lithium’ campaign aims to increase this further with the introduction of eye-catching adverts in several leading consumer golf magazines and dedicated POS material for retailers to display. A new video promoting lithium’s key benefits has also been produced for retailers to use online and in-store.

“Despite the fact that lithium batteries are more reliable and longer-lasting than lead-acid versions, the shift to lithium has been a relatively slow one in the UK,” said Marketing Manager Oliver Churcher. “Our new campaign is designed to give retailers even more ammunition to demonstrate the benefits trolley users will experience when choosing a lithium battery over lead-acid – not least the fact it will save golfers money in the long-term.

“The five-year warranty we placed on our lithium batteries back in 2012 has played a major part in the uptake in sales and is something we recommend our retailers put extra emphasis on when speaking to their customers,” he added.

The 18-hole Motocaddy Lithium battery weighs just 2.5kg – a third of the lead-acid equivalent – while at 3.2kg, the 36-hole Lithium not only offers an increased weight reduction from the lead-acid version, but is considerably smaller at less than half the size. An integrated Battery Management System protects all lithium unitsand helps to provide a five-times-longer lifespan, while they can also be charged from empty in less than five hours.

Motocaddy 18 and 36-hole Lithium batteries have a RRP of £199.99 and £249.99 respectively. Thanks to specialised battery units for S-Series and M-Series trolleys, there are lithium options available for all five electric models in the 2014 line-up.

Meanwhile, LitePower – the No.1 lithium replacement unit on the market with a connection system to fit almost every electric trolley – recorded eight-fold growth figures last year under the marketing wing of Motocaddy.