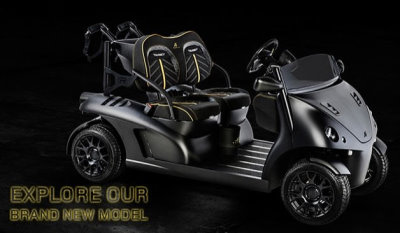 A limited edition of the new Garia Roadster called Garia Mansory Currus will be launched at the 83th International Geneva Motor Show, March 7-17 2013.

Garia, the Danish manufacturer of luxury golf cars, has now launched a limited edition of their newest model, the Garia Roadster.

The limited edition roadster is called Garia Mansory Currus and is designed in close collaboration with Mansory, the car customizer famous for customizing luxury super cars such as Bentley, Bugatti, and Ferrari.

The Garia Mansory Currus, of which only 7 will be manufactured and available for sale, comes with signature Mansory luxury features such as dashboard in genuine leather, custom seat, and carbon fiber rear body and many other details.

For a genuine race car feel, it also comes with an adjustable setting for maximum motor braking and battery regeneration while driving as well as a speed switch with different driving modes called Golf, Street and Race, which adjust top speed and acceleration parameters. These settings are unique to Garia Mansory Currus and not available on any other golf cars currently on the market.

It is fitted with lithium batteries for an extended range of up to 60 km / 37 miles, and a speed package for increased speed of up to 60 km/h / 37 mph*. The Garia Mansory Currus is street legal in Europe.

This limited version vehicle marks the launch of an entirely new Garia model, the Garia Roadster.

“The Garia Roadster is really the closest you get to a golf car version of your favorite luxury sports car. We were inspired by the sense of freedom and joy you get from riding a sports car and we wanted to translate that experience to the golf car”, says Mr. Anders Lynge, Designer and Creative Director of Garia.

The Garia Roadster is a visually athletic car with strong performance and swift handling, perfect for a day at the marina, on the estate, or in your local area. It is available as street legal in Europe and as non-street legal in the U.S.

This week speakers, exhibitors, delegates, media representatives, academics, administrators, students and business advisers have traversed the globe and come together in the search for ‘golf’s new normal’