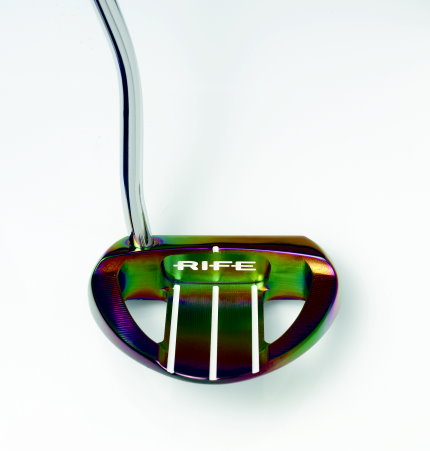 Rife Putters will add the Barbados to its Tropical range for 2012, meaning that Rife’s most successful putter on Tour will now be available with a unique ‘Rainbow’ finish.

An oversized mallet putter, the Rife Barbados has a pleasing shape wrapped around a three line centre cavity section creating a strong alignment aid. The mass of the putter is focused around the outer edges of the putter making theBarbadosextremely stable.

With RollGroove face technology for a quick, true roll and the Lie Aline custom fitting system, theBarbadosalready benefited from Rife’s unique technology. With the addition of the ‘Rainbow’ finish, each putter becomes one of a kind as the Ti plating system used to create the finish gives a unique result every time. Along with the aesthetic benefit the process also increases the putters’ resistance to wear and prevents any oxidization over time

With the addition of theBarbadosto the Tropical Series, Rife has given a proven Tour winner a makeover that showcases its quality. With its new ‘Rainbow’ finish, the Tropical Barbados is a putter that looks as good as it plays.

TheBarbadosis the first of Rife’s additions to the Tropical series for 2012 with more models planned for later in the year due to the success of the line.