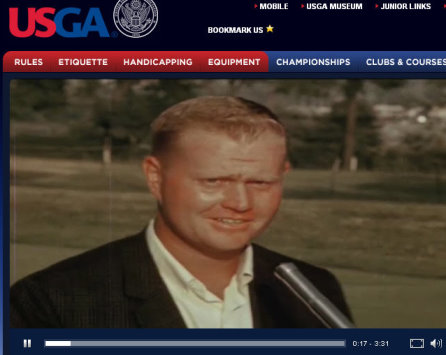 The United States Golf Association announce the production of “1962 U.S. Open: Jack’s First Major,” the USGA’s first-ever film produced for network television. The one-hour documentary chronicles Jack Nicklaus’ first U.S. Open victory in 1962 at Oakmont Country Club, which set in motion one of the most prolific careers in professional golf and at the same time ignited one of the greatest rivalries in sport between Nicklaus and Arnold Palmer.

“1962 U.S. Open: Jack’s First Major” will premiere in the United States on Sunday, June 17, 2012, at 2 p.m. EDT on NBC (check local listings) prior to the network’s live final-round coverage of the 112th U.S. Open Championship at The Olympic Club in San Francisco. The film will make its international debut Sunday 10 June on Sky Sports (SS3).

A preview trailer of the documentary film is available at www.usga.org/62usopenfilm

“We’re proud to make our network television film debut by bringing golf fans around the world this compelling and dramatic documentary that celebrates the 50th anniversary of Jack’s first major championship,” said USGA President Glen D. Nager. “This film masterfully tells the story of the turning point in Nicklaus’ career, from successful amateur and collegiate player to U.S. Open champion, which set into motion a major championship record that has remained unmatched for 50 golden years.”

“1962 U.S. Open: Jack’s First Major” is a USGA film, produced in collaboration with the USGA Museum and Ross Greenburg Productions, and features archival footage of the 1962 U.S. Open from the Museum’s own collection, and other archival material from Oakmont Country Club, the Jack Nicklaus Museum, Augusta National Golf Club and The R&A, and newsreels of the day. The film also includes fresh interviews with Nicklaus, Palmer and other luminaries from golf and journalism to tell the complete story of the 1962 U.S. Open Championship, from the opening round through the dramatic 18-hole playoff, covering events both on and off the course.

“Jack Nicklaus is one of the most compelling sports figures of the last 50 years, and we’re delighted to tell the story of his win at the 1962 U.S. Open through this new film,” said Robert Williams, director of the USGA Museum. “The 90 holes played at Oakmont proved to be a major turning point in golf history, as the U.S. Open validated Nicklaus’ great potential as a professional through the toughest examination in the game. It is a privilege to partner with the storytelling talents of Ross Greenburg in documenting an exciting period in USGA history and celebrating the emerging era of the ‘Golden Bear.’”

“It is an honor and a thrill to be working for the USGA on this legendary story about the 1962 U.S. Open at Oakmont,” said Ross Greenburg, a 51-time Sports Emmy Award winner. “It is also a dream come true to spend time with two icons in the world of golf, Jack Nicklaus and Arnold Palmer, as they document this historic moment in each of their storied careers.”

Narrated by accomplished actor and Emmy Award® winning narrator Peter Coyote, who has lent his rich voice to over 120 films and documentaries, “1962 U.S. Open: Jack’s First Major” culminates in a retelling of the final rounds of the 1962 U.S. Open and Sunday’s dramatic 18-hole playoff, exploring the emotions of Nicklaus, the undaunted young champion, and Palmer, the hometown favorite. The film closes with reflections from Nicklaus on what the victory meant to him then and now, and how it set the tone for an unrivaled career—one that included a record-tying four U.S. Open titles and a total of 18 major wins, a record that stands today.

“I have never been one to reflect on past achievements, but this production allowed me the opportunity to look back on and relive a very significant part of my life and career,” Nicklaus said. “To the credit of theUSGAMuseumand Ross Greenburg Production, their combined research was evident in the interview process. They covered aspects of that U.S. Open that I haven’t thought of in close to 50 years. For example, they unearthed letters exchanged after that U.S. Open between my father and my childhood idol Bob Jones.”

“At that time in 1962, I was a 22-year-old kid with blinders on, focusing on the task at hand which was winning my first professional tournament and our national championship,” added Nicklaus. “Fifty years later, it was nice to take the blinders off and think about all the elements that made for such a meaningful week in my life.”

Funding and support for the USGA film has been generously provided by the Royal Bank of Scotland (RBS), a longtime supporter of Jack Nicklaus and the United States Golf Association. As an RBS Ambassador, Jack Nicklaus represents RBS at business and hospitality functions across the globe.