“Ryder Cup Revealed: Tales of the Unexpected” published next month 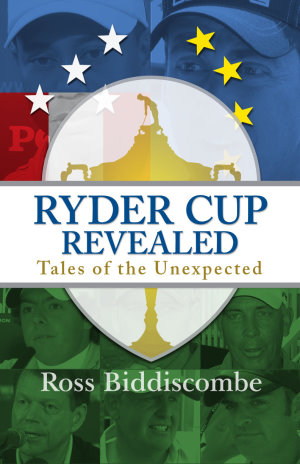 A new book with a business angle about golf’s most fascinating competition – the Ryder Cup – is to be published in July. Ryder Cup Revealed: Tales of the Unexpected by Ross Biddiscombe is a unique social, commercial and sporting history of the Europe vs USA matches revealing new stories, fresh research and unique analysis across nine decades. The title focuses on untold tales of money, politics, rivalries, business, controversies and all the behind-the-scenes intrigue.

Unlike any previous book about the Cup’s 86-year history, Ryder Cup Revealed takes golf fans into the minds of the key personalities, explains the significance of the team rooms, meeting rooms and the locker rooms by linking all the off-course scheming and plotting with how princes and presidents, prejudices and prevailing attitudes in British, European and US society affected the matches.

The book is the product of more than 100 interviews, but not just involving the players. Questions were asked of sports business analysts, top golfing administrators; golf historians; golf agents; senior members of the European Tour, the British PGA and the PGA of America; match organisers; host club secretaries; TV executives; sports commercial experts; and many more people central to the Ryder Cup’s outside-the-ropes story.

There is also key information from the British PGA’s archives; the USGA’s library; the European Tour’s information files; the Samuel Ryder Foundation; and memorable stories directly from host venues both in Europe and America.

Sandy Jones, chief executive of The Professional Golfers’ Association, says in the book’s foreword that Ryder Cup Revealed is “intriguing and enthralling and, like the Ryder Cup itself, totally engaging.”

GBN readers can order the book now for nearly 40% discount to UK addresses.

Ryder Cup Revealed: Tales of the Unexpected is of special appeal to anyone with an interest in the business of golf. Like no previous title, a substantial part of the book delves deep into the commercial side of the Cup – the television, the sponsorship, the profits, the hospitality, the key amounts of cash that mark the series of matches as such a success.

Author Ross Biddiscombe says: “One of the things that became clear when I started reporting and researching Ryder Cup Revealed was the dearth of information about the numbers: the euros and dollars behind the matches.

“Before the mid-1980s when the Ryder Cup was a financial liability and the money involved was much smaller, no one seemed worried about discussing income and profits, but now these are highly sensitive numbers and everyone shies away from discussing them. Some of the match organisers would actually rather not even talk about the numbers at all. However, I have been able to uncover some remarkable financial details and put them into context with the history of the event and other major sporting tournaments – something that has never properly been done before with the Ryder Cup. As a writer, you know that you are on the right track when a few key people raise their eyebrows because they are surprised how much detail you have gathered.

“And, because of all the historical financial reporting of the matches, the book can also predict the future success of the Ryder Cup as well as some of the potential problems that the matches will encounter. The investigation in the business of the Cup was the most revealing part of the whole process.”

To read more about the book and to pre-order an autographed hardback copy with an exclusive GBN subscriber discount, click here to go to the Ryder Cup Revealed sales website. Look for the Golf Business News Special Discount Offer purchase box and type the words ‘GBN Offer’ either into your address or your purchase details. Your signed copy of the book will be mailed out in the first week of July.

Ryder Cup Revealed: Tales of the Unexpected by Ross Biddiscombe is published by Constant Sports & Dolman Scott and will also be available as an ebook.