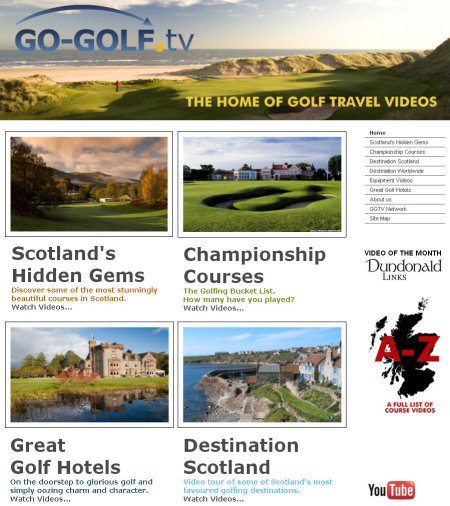 Clive ‘Silky Swing’ Agran and David J Whyte are both regular contributors to all the UK’s leading golf magazines. Whyte is also a photographer of renown, published in golf magazines around the world as well as the Official Guide to Golf in Scotland for which he is the main lens man.

Whyte ventured into digital video 6 years ago creating beautiful presentations on Scotland’s top courses. “I could see that video would become popular especially on the internet and, as I was already out taking still pictures, I started shooting golf courses in HD video.”

Most of the main courses in Scotland now have commissioned Whyte to make their web video. It was a request from an In-Flight-Entertainment distribution agency that has led to the ‘Golf Passport’ idea. “A company in Madrid had seen our Go-Golf.tv course productions and asked us if we could make longer features to be part of various airlines’ In-Flight programming,” continued Whyte. “We made a pilot show on St Andrews which has been enthusiastically received.”

The airlines are not only interested in Scotland! They are looking for a variety of content hence the birth of the “Golf Passport” idea. Each half-hour long programme will showcase three completely different destinations along with one golf tuition segment presented by leading golf coaches.

With Clive Agran’s ready wit and charm as well as his consummate knowledge of the golf scene, he makes the prefect host coupled with Whyte’s keen eye for superb visuals. Programmes on the Cote d’Azur, Caribbean, Wisconsin, NW & SE Ireland, Tenerife, Northern Michigan, East Sussex, Carnoustie Country and Gleneagles are all scheduled for this year. “With some airlines requesting a monthly programme turn-around, there is a pressing need for more destinations to be included,” added Whyte. There is no cost to destinations to be included in a ‘Golf Passport’ programme apart from the usual press visit arrangements.