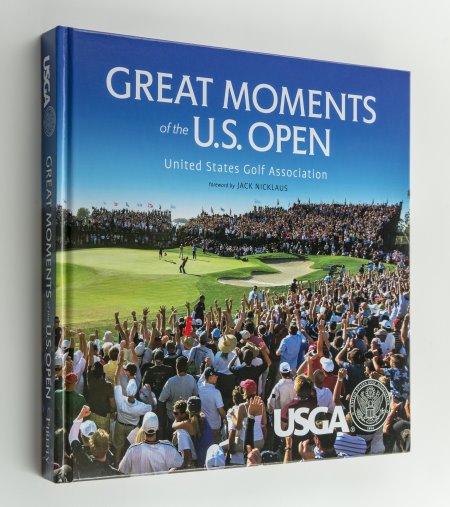 To celebrate the best of America’s most prestigious golf championship, the United States Golf Association (USGA) has announced the release of its new book, “Great Moments of the U.S. Open.”

Written by Robert Williams, director of the USGA Museum, and Michael Trostel, the Museum’s senior curator and historian, the book celebrates the accomplishments of U.S. Open champions, shares their inspirational stories and chronicles the extraordinary circumstances that each faced.

Rand Jerris, senior managing director of public services for the USGA, served as supervising editor, and among the contributors are Mike Davis, executive director of the USGA, and John Mummert, manager of creative services and senior staff photographer for the USGA.

Complete with a foreword by four-time U.S. Open champion Jack Nicklaus, “Great Moments of the U.S. Open” draws together heroes, past and present, who persevered under the most demanding conditions to become America’s national champions.

Release of the book coincides with the 100th anniversary of amateur Francis Ouimet’s shocking victory over top British professionals at The Country Club in Brookline, Mass., and the return of the U.S. Open in June to Merion Golf Club, site of Ben Hogan’s 1950 comeback from a near fatal car accident.

From Horace Rawlins’ improbable victory in the inaugural U.S. Open in 1895, to Nicklaus’ narrow defeat of Arnold Palmer in 1962 for his first professional win, to Tiger Woods’ breathtaking triumph on a broken leg to capture the 2008 U.S. Open, “Great Moments of the U.S. Open” uses the USGA Museum’s collection of stunning archival images and artifacts to bring to life some of the most memorable U.S. Open victories.

“The U.S. Open has long been celebrated as the game’s premier championship,” said Jerris. “Its history is full of unforgettable moments – spectacular shots, amazing comebacks and legendary champions who have inspired generations of golf fans. As some of the stories in the book demonstrate, the U.S. Open has also been marked by incredible stories of courage and determination that have been all but forgotten with time, but that deserve to be remembered among the most inspirational moments in golf history.”

“Great Moments of the U.S. Open” features 27 stories that provide readers a unique and authoritative view on America’s most prestigious golf championship.

“The U.S. Open helped to solidify golf’s standing in America and has expanded the game’s reach around the globe,” said Trostel. “This book celebrates some of the defining moments and iconic champions in the U.S. Open’s rich history. While the championship has evolved dramatically since its origin in 1895, the critical ingredients remain the same. It is golf’s most complete test, played on the country’s greatest courses and is open to all who have the skill, passion and determination to compete.”

Published by Firefly Books, “Great Moments of the U.S. Open,” is a 216-page celebration of one of the world’s premier sporting events, making it a must-have for golf fans and sports history enthusiasts.

The book is currently available for purchase at www.usga.org/publicationsstore, as well as Amazon and Barnes & Noble stores.