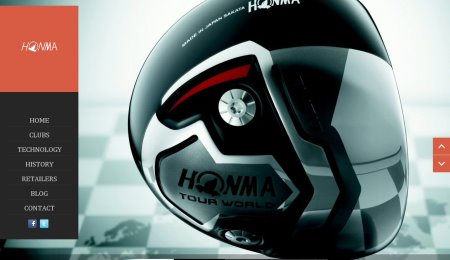 It has taken 55 years, but iconic Japanese equipment brand Honma finally has a website for its growing UK customer base.

The new site – at www.honma.co.uk – showcases the brand’s 2013 UK range, which is headlined by Honma’s new-for-2013 Tour World clubs, which are aimed at better players and serious golfers.

Elsewhere visitors will learn about the key events in the company’s long history, and will also gain a behind-the-scenes look at the manufacturing processes and technology which differentiate Honma from other brands.

“There are a large number of people in the UK golf industry who know and understand Honma,” said UK spokesman Andy Hiseman. “But to the general golfing public, Honma is still largely a mystery. In 2013, with Tour World generating a buzz in the media, we felt the time was right to open our doors and reveal more about ourselves to UK golfers with our first-ever website, which will be backed up on Facebook and Twitter of course.”

The website also enables UK golfers to find their nearest Honma stockist. “Buying Honma golf clubs is a one-on-one experience” said Hiseman. “We do not retail on the web, although we do encourage our retailers and custom-fitters to showcase our range on their own websites. However, to buy Honma, we like you to get fitted properly, by an expert.”

Honma is famed for its 5 Star clubs, which feature advanced shafts, intricate detailing and expensive materials such as gold and platinum. The 2013 UK range is topped by the 5 Star Tour World irons set at £26,995, although the majority of UK Honma sales come at far lower price points.

“Honma has had a reputation for high prices” said Hiseman, “but in 2013 people are beginning to focus on what the brand actually stands for, which is performance and excellence. Our slogan this year is ‘When it comes down to that one club, that one shot, nothing beats a Honma’, which we think encapsulates why so many serious golfers around the world insist on playing Honma, when seeking the ultimate in performance.

“Yes we can hand-build Honma golf clubs which would look good on your yacht, and we often do, but the bulk of our UK sales are made for less esoteric reasons. People love the way Honmas feel, and they love the astonishing power they generate. In 2013, starting at £1,275, a set of Honmas is still a high-end purchase, but not by any means stratospheric.”

Along with the website and social media, the brand’s first UK advertising campaign for decades is set to start later in the summer.