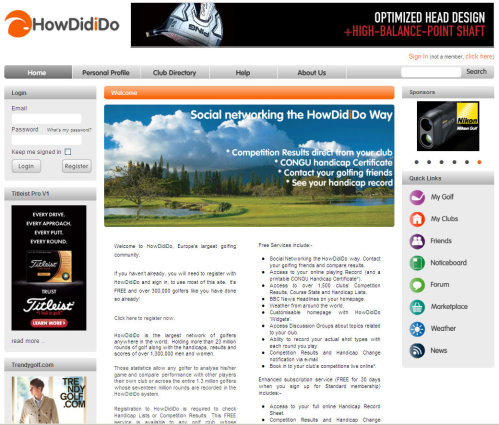 More than 11,500 golfers have entered the inaugural HowDidiDo Golf Monthly order of merit which runs until the end of this month.

The competition is open to any member of a golf club registered at HowDidiDo – Europe’s largest golfing community – and is aimed at the thousands of regular golfers in the UK&I who compete in medal competitions and enjoy benchmarking their game against friends and fellow golfers.

Scoring for the order of merit is based upon the results issued by the golf club to HowDidiDo for qualifying competitions. There is no need to play additional rounds to participate and club officials are not required to do anything other than input the scores as they would normally.

A player’s scores are collated from each medal competition they have played at their own course between August 1 and October 31. And the final positions will be determined by the best three qualifying scores recorded during that period. Scores are worked out on best net differential – the score relative to CSS – to ensure a ‘level playing field’ regardless of the difficulty of the individual courses.

Two PowaKaddy electric trolleys and eight pairs of FootJoy MyJoys are among the outstanding prizes up for grabs in competition.

Even with a membership of more than 300,000, and a database of handicaps, results and scores for in excess of 1,200,000 men and women, organiser HowDidiDo was still taken aback by the number of entries.

HowDidiDo’s managing director, Barry Dyett, said: “We thought the concept of an order of merit would prove popular but we have been staggered by the response. Originally, Michael Harris – the editor of Golf Monthly – and I were hoping to have around 5,000 people participate, so to have more than 11,500 is better that we would ever have imagined.

“What it shows is that club golfers are looking to play competitive golf whenever they can. This isn’t a board in the clubhouse but it does give people the opportunity to get their name up on the web and see how their game measures up against the rest of the HowDidiDo population.

“Even if you’re a single-figure player the best you can normally hope to do is to play in county opens against players of similar standing. This is different but it’s a much larger stage. It’s about measuring yourself against your amateur peers and the introduction has created a great buzz and atmosphere on the site and the HowDidiDo forums.”

There are three divisions for men and two for ladies, determined by handicap. Each divisional winner receives a pair of FootJoy MyJoys, plus there are additional prizes for the overall winners, the under-16 winner and the most improved player, including Titleist Pro V1 balls, Titleist StaDry waterproof stand bags and PowaKaddy Touch electric trolleys.

Plans are already being made for enhancements for the 2012 competition which HowDidiDo hope to launch in the Spring of 2012.

The HowDidiDo service is also available free to any golf club – and consequently its members – which uses the market-leading CLUB2000 software from Club Systems International which is in place at 1,500 UK clubs.