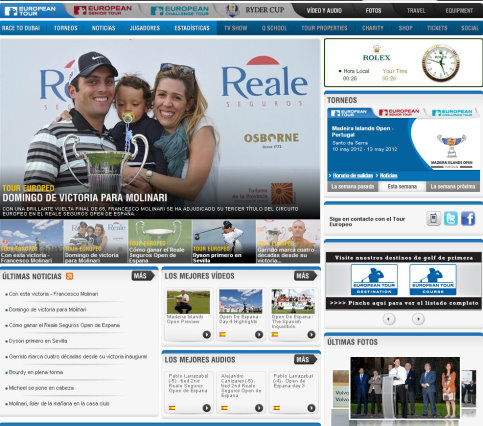 A Spanish version of www.europeantour.com has been launched as The European Tour and Royal Spanish Golf Federation (RFEG) begin a new multilingual partnership on the 40th anniversary of the Tour and the centenary of the Reale Seguros Open de España.

es.europeantour.com is managed in partnership with the RFEG as part of the Tour’s multilingual strategy following the introduction of French and German versions last year, and is aimed at further enhancing the user experience for the Tour’s growing global fan base by providing content in local languages.

The launch of es.europeantour.com coincides with the centenary celebrations for the Reale Seguros Open de España at Real Club de Golf de Sevilla and 40 years since the event launched the fledgling European Tour in 1972.

Mark Lichtenhein, The European Tour’s Director of Broadcasting and New Media, said: “The partnership with the Royal Spanish Golf Federation is another important step forward in our strategy of providing a localised experience of The European Tour for our fans all over the world.

“The European Tour visits 25 countries around the world, with 46 nationalities represented among our membership, and it is fitting to launch es.europeantour.com during such an historic week for both The European Tour and the Reale Seguros Open de España.”

Gonzaga Escauriaza, President of the Royal Spanish Golf Federation said: “The launch of the Spanish version of the European Tour website will help encourage the growth of the game in Spanish- speaking countries, both those with a longstanding golf tradition and those that are newer to golf. This agreement will put a wide range of information at the disposal of golf fans, and will no doubt become a particularly useful tool for the media.”

The strategy of working with federations and local partners within The European Tour family heralded a new approach to developing multilingual opportunities and aims to replicate the model across Europeand around the world. europeantour.com’s multilingual programme began with the French and German Golf Federation partnerships (SFR in Franceand golf.de in Germany) last year and continues with the Spanish version in partnership with the RFEG. The different language options can be accessed through the icons on the top right corner of www.europeantour.com homepage.