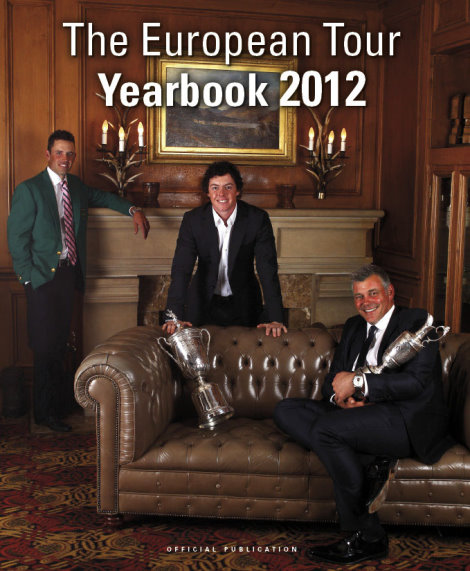 The European Tour Yearbook, first published in 1988, reviews another historic season for our Membership with the winning once again of three Major Championships by Charl Schwartzel (Masters Tournament), Rory McIlroy (US Open Championship) and Darren Clarke (The Open Championship).

In addition, there were numerous other achievements including Luke Donald winning the WGC-Accenture Match Play Championship, the BMW PGA Championship and the Barclays Scottish Open during a season in which he emulated Lee Westwood and Martin Kaymer in ascending to World Number One. Martin, of course, moved on from winning the Abu Dhabi HSBC Golf Championship in January to capture the WGC-HSBC Champions in November, while Lee claimed the Ballantine’s Championship inKoreain May.

Severiano Ballesteros was the inspiration behind The European Tour and there are chapters dedicated to his life and career and to The 2012 Ryder Cup – the biennial competition in which Seve played such a massive role in transforming the fortunes of the European Team.

The 2012 European Tour Yearbook also traces The Race to Dubai every step of the way – including celebrating Thomas Björn’s three victories, recognising the emergence of Tom Lewis who won his first Tour event in only his third professional appearance, and heralding Matteo Manassero, who completed a second victory before his 18th birthday. It also includes chapters devoted to the European Senior Tour and the European Challenge Tour.

The 2012 European Tour Yearbook is priced at £20 and its expected release date is 16th December; available through the shop at European Tour www.europeantour.com