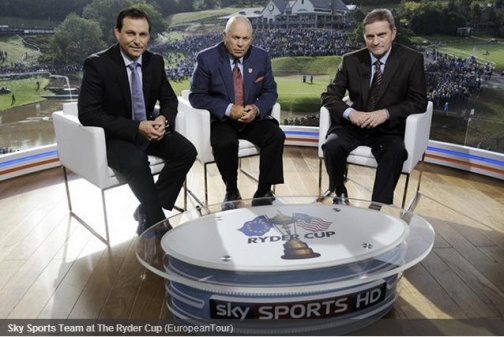 With the current arrangements running through to the end of this year, the new agreement will see Sky televising all European Tour tournaments, World Golf Championships and three Ryder Cup Matches exclusively live on all Sky Sports platforms until the end of 2018.

The BBC will retain extensive highlights rights to all three Ryder Cup Matches – to be played at Gleneagles in Scotland in 2014, Hazeltine National in the United States in 2016 and Le Golf National, France, in 2018 – together with highlights of both The European Tour’s flagship event, the BMW PGA Championship and the newly announced Aberdeen Asset Management Scottish Open. BBC Radio 5 Live will also retain live and exclusive UK radio rights to The Ryder Cup.

The European Tour’s Chief Executive George O’Grady said: “We are delighted to announce this long term agreement with both Sky and BBC Television, which guarantees the Tour superb high quality visibility for the next six years. Sky’s dedication and ground breaking technology complements the performance of all our international members on the world stage, which currently sees three European Tour Members, all of whom are British, occupying the top three positions in the Official World Golf Ranking.

“BBC’s support maintains its close association with the Tour and continues their exceptional coverage which has been taking place for over 40 years.”

Barney Francis, Managing Director of Sky Sports added: “Our viewers have seen the growth of the Tour, the rise of The Ryder Cup and European golfers on top of the World Ranking. Now they can be promised even more.

“This new deal brings three more Ryder Cups, more exclusive tournaments and six more years of golf right through the calendar – all in HD, online and through mobile devices.

“We have a valuable partnership with The European Tour; they have the events our viewers want to see and we have enjoyed The European Tour’s continued growth.  We now look forward to taking this relationship well into its second decade.”

Barbara Slater, Director of Sport for the BBC, commented: “Golf is an integral part of the BBC’s sports’ rights portfolio and with this new deal we’re very pleased to have retained extended highlights and live radio rights to The Ryder Cup until 2018.

“This has proved to be an extremely popular format with viewers and listeners. We look forward to continuing our relationship with The European Tour and bringing a wide range of tournaments to our audience, including The Open Championship and the Masters.”