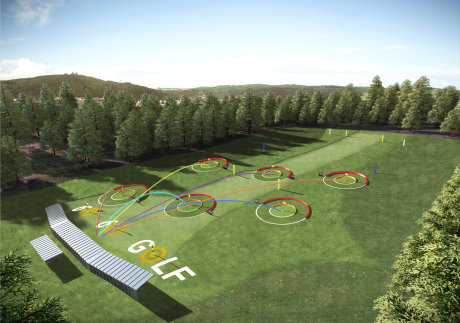 60 60 Golf has announced that it has now installed its patented pitches at 19 driving ranges across the British Isles.

This massive nationwide pitch invasion comes on the back of a hugely successful 42-date 60 60 Golf Demo Day Roadshow which has resulted in a dramatic uplift in the number of golfers who have registered to play the new quick and affordable interactive form of the game.

Well over 5,000 range users have signed up as members of the 60 60 Golf revolution and that number should continue to grow as more and more people now have the opportunity to take to this new format.

“We launched the Golf Demo Day Roadshow to raise awareness of 60 60 Golf and have been bowled over by the positive feedback the game has received,” said the game’s inventor Craig Higgs.

“The game has now been installed at just over 50 ranges around the country and we expect that number to increase substantially as the Roadshow takes us to new parts of the country.”

60 60 Golf was launched in the middle of 2012 and is proving to be an increasingly popular alternative to the more traditional form of the game of golf.

The 60 60 Golf format is designed to be quick and affordable and gets its name from the fact that participants can hit 60 shots in the space of an hour. It offers participants multiple interactive game options but the basic idea involves hitting shots at a series of different targets which 60 60 Golf provides when a range installs the concept.

The 60 60 Golf Roadshows were organised to give range users the chance to sample the game and also to take part in a series of competitions for men, ladies, seniors, junior boys, junior girls, min-hitters and the disabled. The overall winners at the end of the series will be awarded trophies proclaiming them to be the UK’s Best Range Players in their specific categories.

A full list of the remaining dates on the Demo Day Roadshow plus further information about 60 60 Golf is available from the company website at www.6060golf.com