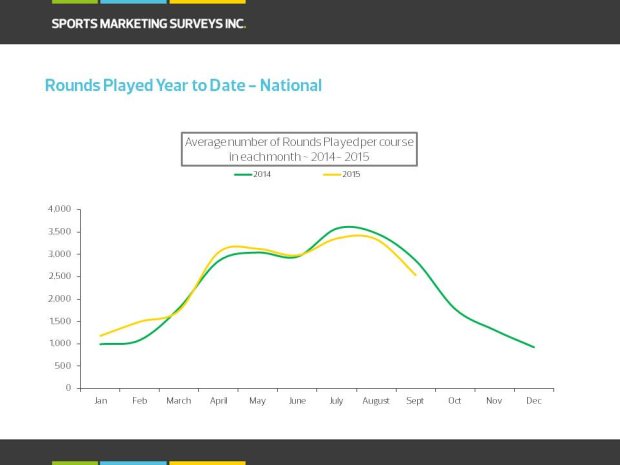 Leading sports research company SPORTS MARKETING SURVEYS INC. has announced a year on year decrease in the number of rounds played in the UK during the third quarter.

SMS INC. have confirmed that the average number of rounds of golf played across England, Wales & Scotland during 3rd quarter 2015 is down 7% on the 3rd quarter 2014. However, this damp and disappointing quarter cannot undo the good work of the first half of the year and the year to date total remains up 1%.

Scotland suffered most during a third quarter which yielded wet and wild weather like that which forced The Open into a Monday finish. A decrease in each month resulted in a quarterly downturn of 24% year on year and has extended Scotland’s year to date cumulative decrease to 14%.

Alongside the quarter’s changeable climate, SMS INC. considered further factors that influenced the numbers. A thrilling home Ashes series, World Athletics Championships and the start of the Rugby World Cup in England and Wales saw weekends occupied by sports other than golf, 2015 also marked the first year of a later start to the Wimbledon Championships with all but the first two days falling in the third quarter unlike in previous years. The presence of these events perhaps acted as a distraction to participating.

SMS INC.’s Richard Payne, Senior Manager commented “Inclement weather and a variety of sporting events have taken their toll on rounds played for Q3 this year although it is important to bear in mind that 2015 figures are still above those seen in 2013 and 2012.

Looking at the year to date figures, there is still cause to be positive about golf participation this year with rounds remaining 1% up on 2014 and at the highest level for the last 4 years”