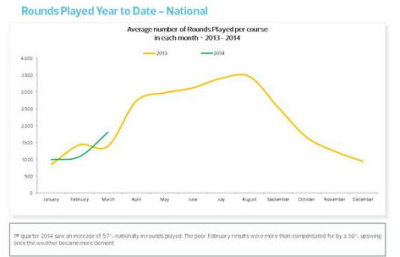 Despite the wettest January on record, the start of 2014 should have filled the golf trade with great optimism as the numbers of rounds played were up by 17% in comparison to the snow affected January of 2013. The stormy weather continued into February and resulted in extensive flooding and widespread course closures throughout much of the UK. A downturn in the amount of golf rounds being played ensued.

Irrespective of the little golf being played in February, and the potential distraction of an exciting culmination to the 2014 6 Nations Rugby championship, the loss of Rounds played in February were more than compensated for by a 30% upsurge in the number of rounds played, as a mild Spring arrived early in March. The surge in the amount of golf being played (in March) corresponded to a bettered first quarter against the 2013 numbers.

Richard Payne, Senior Manager of Sports Accounts at SMS INC. commented, “A first quarter increase of near on 6% (vis-à-vis Q1 2013) is a good omen for golf participation for the rest of the year. We know from our experience that if golfers are out on the course playing before the Masters, then the game can expect to play a larger part of their year, with further rounds to follow suit…here’s to an exciting 2014 of golf.”

*Since 2000 SMS INC. has monitored the number of rounds of golf played in Great Britain, and had produced a recognized report ever since. The report monitors the rounds played at public access golf courses throughout mainland Great Britain.