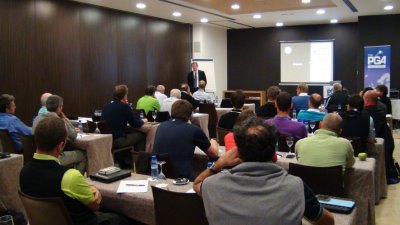 Details have been released for the not-to-be-missed 2013 PGAs of Europe Coaches Circle and Heads of Training Summit, taking place this year at Chervò Golf Hotel Spa & Resort San Vigilio, Italy.

After the successful inaugural dual-event took place at the Lumine Mediterránea Beach & Golf Community in 2012, the events return to a new venue in which delegates will be greeted with a fantastic line-up of speakers and cutting edge subject matter.

The events will bring National team coaches together with coaches of elite players and are run separately but consecutively:

Coaches Circle 18-20 March 2013 – Here national coaches, coaches of elite players (on a level 1,2 or 3 tour), and coaches involved in national junior programmes, are invited to attend theory and practical sessions.

Heads Of Training Summit 21-22 March 2013 – Sessions are focussed on the latest information relating to the training of PGA Golf professionals and is tailored to Heads of Training or nominated individuals working within a PGA Training Programme on the delivery of such programmes.

Director of Education & Membership for The PGAs of Europe, Tony Bennett said “The Coaches Circle has already become a not to be missed event. We have had many positive comments on how the 2012 Coaches Circle helped shape the preparation of National Team players in various countries”

He went on to say of the Heads of Training Summit: “Bringing together the Heads of Training allows us to better appreciate the challenges that our Member countries face while at the same time sharing good practices, offering solutions and facilitating meaningful discussions that have a long term effect on the future of the PGA golf professionals”.

Mike O’Brien, Director of Education for the PGA of Poland, a delegate at last year’s Coaches Circle, said “It was very good, very insightful, there were good topics and good information, and not only that we had an opportunity to network and sit down and talk in-between and after the conferences…

“When you’re away with the national team you don’t often have time to sit down with other coaches and talk so this was really good to talk about things that happen in different countries and different approaches.”

Both events will be set in the beautiful surroundings of the Chervò Golf Hotel Spa & Resort San Vigilio in Pozzolengo, in the splendid setting of Lake Garda, which is immersed in the green morainic hills.

Further details of the speaker lineup and sessions will be released soon. For more information or to register, contact Tony Bennett – tb@pgae.com.

St Enodoc Golf Club in north Cornwall has launched some dynamic, modern mobile content to showcase its Church Course, regarded as one of the finest championship links in England.

April 2021 will see the launch of Rocco Forte Private Villas, consisting of the first 20 branded independent villas overlooking the sparkling bay of Verdura Resort in Sicily.