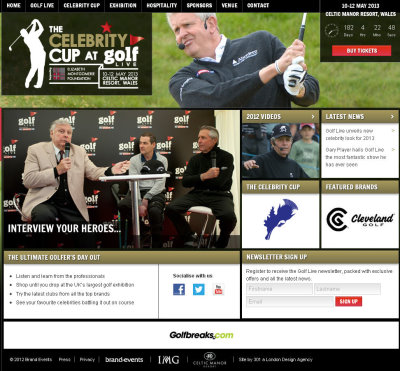 European Tour legend Colin Montgomerie is set to head an A-list of stars from the world of sport and show business in an exciting new celebrity event that will form part of Golf Live 2013.

Montgomerie will oversee four teams of celebrities that will take part in The Celebrity Cup at Golf Live when the fourth version of the annual show takes place from 10-12 May, 2013, at a new venue – The Celtic Manor Resort, host of the 2010 Ryder Cup.

The new competition, supporting The Elizabeth Montgomerie Foundation, will see teams from England, Scotland, Wales and Ireland led by celebrity captains from each home nation compete over the three days for top honours.

The event promises to be one of the highlights of Golf Live 2013 and, with all the previous features returning including the chance to see top players in action, enjoy skills clinics and club-fitting, and with the game’s top brand names attending, visitors are guaranteed an experience that is bigger and better than ever before.

Montgomerie, winner of eight European Tour Order of Merit titles and captain of Europe’s victorious Ryder Cup side in 2010, said: “Golf Live has created a real buzz since it started and I’m really excited at the prospect of the new celebrity competition.

“There is no other event like it in golf, and for golfers to be given the chance to come along and see the interaction between the pros, the general public and now the celebrities is fantastic.

“Golf Live truly offers something for everybody and the fact that it is in aid of my mother’s foundation and is being staged next year at Celtic Manor, a venue very close to my heart after my captaincy of Europe’s Ryder Cup win there two years ago, makes it extra special for me.”

Event ambassador Montgomerie has played a key role in establishing Golf Live as a regular fixture on the golfing calendar and a host of other celebrities are set to be announced by organisers in the weeks and months to come leading up to the event.

And Celtic Manor is the ideal venue to entertain top names from sport and showbiz having successfully hosted the celebrity All*Star Cup in 2005 and 2006, as well as the Ryder Cup.

Celtic Manor chief executive Dylan Matthews said: “Golf Live and The Celebrity Cup are the perfect fit for Celtic Manor where we have always strived to introduce the game of golf to new audiences.

“Having exhibited at the previous three shows, we know all about the unique appeal of Golf Live and we also know from past experience that crowds will turn out in their thousands to watch top celebrities playing golf. We’re looking forward to hosting a fantastic weekend of golfing fun in May.”

James Goode, Golf Live’s event director, said: “We have been delighted with everything we have achieved at Golf Live over the last three years and wanted to add a new dimension for 2013.

“With the new event and new venue, there will be more celebrity names than ever for fans to interact with while we are relishing the chance to work with The Celtic Manor Resort, one of the biggest destinations for golf in the UK.”

Russ Lindsay, the producer of The Celebrity Cup, added: “In 2005 and 2006 when we brought the All*Star Cup to Celtic Manor, the support for the event from the media, celebrities and the public was incomparable.

“The Celebrity Cup is already generating the same enthusiasm from celebrities, and being a four nations competition, it will no doubt replicate the same excitement on the course for both players and gallery alike.”

Organised by Brand Events and IMG, Golf Live has attracted an audience of around 40,000 golf fans since it was launched three years ago and is the most interactive show of its kind in the world.

In addition, the show is also set to feature the latest equipment from all the major manufacturers while visitors can discover the hottest golfing destinations, latest fairway fashions, cutting-edge game-improvement gadgets and gizmos, and everything else golf-related.

Golfbreaks.com, Europe’s largest golf travel company, continues to support Golf Live and is once again the Official Destinations Partner of the event.

Golf Live 2013 will take place at The Celtic Manor Resort from 10-12 May 2013, and for more information or to buy tickets visit www.golfliveevent.com