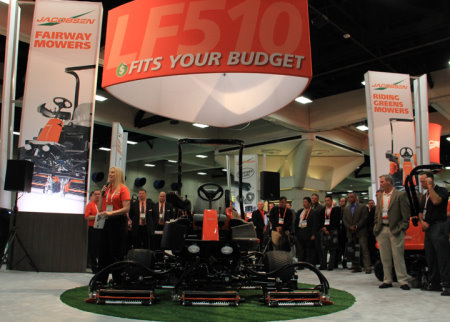 Jacobsen, a Textron Inc. (NYSE: TXT) company, created quite a stir at the 2013 Golf Industry Show in San   Diego, California. With a showcase of six new and enhanced products, an expansive booth complete with a test track, and an unprecedented presence in and around the San DiegoConvention Center, Jacobsen was the talk of the town during GIS week.

“Our goal for this year’s Golf Industry Show was to blanket San Diego in Jacobsen orange,” said Chris Vernon, Vice President of Product Management and Marketing for Jacobsen. “With more new products on the show floor and more people on the streets, the Jacobsen presence at the GIS was larger than ever before. Based on the increased booth traffic, heightened interest and level of engagement with customers, our efforts exceeded all expectations.”

Jacobsen’s GIS presence was anchored by a host of new and enhanced products.  Leading the charge was the company’s new LF510™ fairway mower, which was uncovered soon after the exposition opened on Wednesday morning. Attendees also got their first look at an ECLIPSE™ 322 riding greens mower with Lithium power. A large track in Jacobsen’s booth allowed visitors to take the Lithium-powered mower for a test drive.

The excitement around Jacobsen spilled out into the areas outside the Convention Center as well, where conference attendees experienced a Gaslamp Quarter resplendent in Jacobsen orange. As part of Jacobsen’s GIS “Orange Everywhere” campaign, Jacobsen-branded pedicabs and muscle cars dotted the city streets while Jacobsen brand ambassadors greeted guests with gift cards, t-shirts and other giveaways.

“Our increased presence at the Golf Industry Show is a reflection of our continued business strategy of building relationships,” said David Withers, President of Jacobsen. “In 2013, we are adding to our sales force, working with channel partners to expand and improve sales and service, and launching additional product innovations and enhancements. Just as in San Diego, Jacobsen will be more visible in 2013 than ever before.”

The Jacobsen booth saw heavy traffic throughout the 2013 Golf Industry Show in San Diego. The company showed a host of new products and enhancements, including the LF510™ fairway mower. Soon after the show opened on Wednesday, Jacobsen pulled the cover off the LF510 in front of a large audience of superintendents and media. Jacobsen Product Manager Rachel Luken is seen here introducing the LF510.

During the 2013 Golf Industry Show in San   Diego, Jacobsen blanketed the town in orange as part of a guerrilla marketing campaign appropriately titled ‘Orange Everywhere.’ Jacobsen-branded muscle cars and pedicabs lined the streets while Jacobsen brand ambassadors (seen here) handed out free t-shirts and other items to show attendees.