Tour Performance Institute to be first in UK 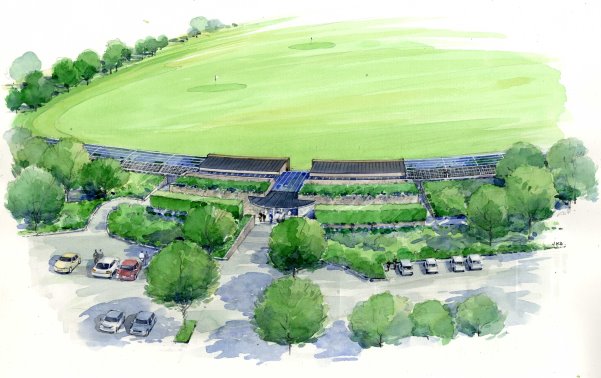 There are exciting times ahead for London Golf Club as the South East’s premier golfing destination announces that, together with its joint venture partner, The European Tour it has submitted plans to local authorities for the construction of a new European Tour Performance Institute (ETPI) complete with driving range and an innovative 9-hole Academy course. Alongside the existing 36-holes of championship golf and 130-bedroom luxury 5-star hotel and spa, for which planning permission has already been granted, these significant developments encapsulate the club’s vision of becoming a world-class destination primed for hosting major golfing events.

The state-of-the-art European Tour Performance Institute (ETPI) complete with a fully-covered driving range and inventive short-game facility, will be the first of its kind in theUKand promises to raise the bar in golf coaching and sports science. Unlike any other golf school, the ETPI at London Golf Club will use the very latest technology, biomechanics and tools developed by elite professionals and medical specialists on the European Tour. Golfers of all levels and abilities, including visitors from abroad will be able to optimise their capabilities and reap the benefits of over 25 years of analysis of some of the game’s greatest players, high-tech equipment and pioneering facilities.

Commenting on the significant developments on the horizon, London Golf Club’s General Manger, Austen Gravestock said, “We are a very forward-thinking golf club and I firmly believe the new ETPI, Academy and 9-hole golf course will elevate our status on the International golfing arena. Along with our stunning 5-Star Hotel & Spa and close proximity to the Capital, major road networks and International Airports, London Golf Club is set to become an important destination for The European Tour, international golf tourists from Continental Europe and further afield, as well as golfers from London and the UK.”

David MacLaren, Director of Property and Venue Development at The European Tour, said: “Our partnership with London Golf Club goes from strength to strength and we again applaud the foresight of the club and its owners. We recently opened the world’s first European Tour Performance Institute at Terre Blanche inProvence, also a European Tour Destination, and I am confident that the creation of a state of the art practice and learning facility at London Golf Club will be of great benefit to club members, visitors and the wider community.”

Designed to complement the club’s Heritage and International courses, that have both hosted high-profile professional tournaments and events, including The European Open in 2008 & 2009 and Golf LIVE, the new 9-hole academy golf course will be located alongside the ETPI on the eastern side ofSouth Ash Road. Designed by award-winning architects, European Golf Design (EGD), a joint venture   between the European Tour and IMG, this innovative and thought-provoking course will only serve to widen the appeal of London Golf Club as well as provide a much more player friendly golf course, ideal for those learning the game, hotel guests and juniors.

With the plans now submitted to the local authority for their consideration, Jeremy Slessor, European Golf Design’s Managing Director, said: “It’s been a fascinating start to the project – combining the evolutionary approach to performance and training of the ETPI with an Academy facility that will support, without replicating, the two existing courses at The London Club. Trying to marry the requirements of the European Tour with the need to provide a bespoke training course, concentrating on game improvement, has been challenging – but we feel confident that this is what we’ve achieved. Added to this has been the desire to restore the terrain from an open agricultural field to one with a diverse environment, supporting diverse habitats resulting in a richer ecological landscape.”