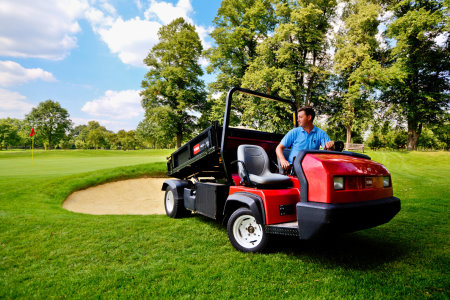 Roehampton Club, London’s premier golf, tennis and croquet venue, has achieved some of the smoothest, truest greens the Sports Turf Research Institute (STRI) has ever recorded, thanks in part to its new Toro equipment.

Located in stunning parkland in the heart of London, Roehampton is an exclusive private members sports club that has hosted four Croquet World Cups – including the forthcoming tournament in 2013.

But whether he’s maintaining the club’s reputation as one of the world’s best croquet venues, or keeping the golf course and tennis courts in perfect playing condition, it’s safe to say that the care of Roehampton’s fine turf is crucial to course and grounds manager John Lockyer.

As a former STRI consultant for six years before joining the club in June 2011, John knew that the right mowers were vital to achieving his goal: the smoothest, truest greens possible. A competitive demo saw Toro come out on top.

“I’ve used most of the main machinery makes, but have always favoured Toro based on its performance and reliability,” says John. “During the demo, Toro outperformed the rest for our conditions in terms of quality of cut on all areas.”

John says that the machines are now hard at work across the 18-hole golf course as well as the 15 grassed tennis courts and croquet lawns, plus general landscape areas. “There have been noticeable improvements to fine turf areas,” John adds. “The TriFlex has particularly allowed us to achieve a lower height of cut and higher clip rate to cope with the contours of the course. We’re also working towards the Croquet World Cup and need to produce world-class playing conditions for that. So the 14-blade Flex 21 has been very impressive on the croquet lawns. The all-round productivity and performance of the machines is far better than those they replaced.”

Better still, John and his team’s improvements programme and use of the Toro fleet has really paid off. Recent performance testing by the STRI saw the greens praised as “truly excellent” and noted as some of the best it’s recorded in line with Championship golfing venues.