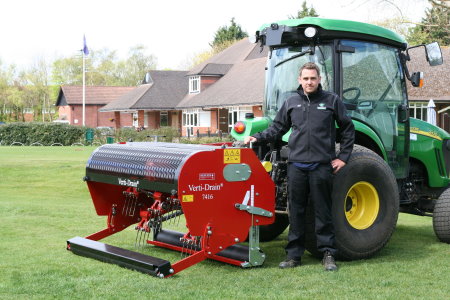 Opened for play on 12th December 1896, Maidenhead Golf Club has obviously evolved over the intervening years, but it is still based around its original construction. This means the greens have not been purpose constructed to modern standards but are essentially constructed on natural clay over gravel base. Over the years, the clay has formed a moisture-retaining bowl that needs careful management to prevent the greens becoming waterlogged.

“Aeration has always been important to us as it speeds up drainage by punching through the clay and down into the gravel below.” says the club’s Acting Course Manager Barry Gardner. “Like most courses these days, members want to be able to play pretty much year round. But to be able to deliver consistent play and quality greens we have to be able to work on them – it is a balancing act at times. Good aeration equipment is a key tool for helping to keep traditionally constructed courses in play year round.”

The club’s original thinking was to have a machine based upon its speed and ability to cover a wide area quickly, however, this was at the expense of an ability to work deeply.  “We have worked really hard to look after the root zone in the greens,” adds Barry, “but to really get maximum benefit we need to go deeper than the 9 inches we were restricted to with our previous aerator.”

A loan of a Redexim Verti-Drain™, from Charterhouse Turf Machinery, that worked down to a greater depth than 9 inches, proved the point by having a marked impact upon improving the speed at which water drained from the greens. “We were also impressed with the solid build of the Verti-Drain™ we borrowed, but it was too heavy a machine for our John Deere 4250 to handle comfortably so we decided to try a smaller model, the Verti-Drain™ 7416.”

Suitable for use with a range of tine sizes and types, the Verti-Drain™ 7416 can be fitted with 14-inch long solid ¾ inch tines, these proving to offer exactly the working depth Barry was looking for. The plan is to now use these heavy tines to really help improve the structure of the greens.

“It follows that our members do not want the greens disturbed during the season,” he adds. “But we aim to go over the greens at least twice a year with the heavy tines in our new 7416. We have already seen an improvement to the way in which the greens drain since using the new Verti-Drain™, but we can only use the machine at its full depth when our members allow. We are an extremely busy course, so will need to time deep aeration accordingly.”

“It’s not that the Verti-Drain™ causes a difficult to remedy heave after an aeration pass at maximum depth,” Barry is keen to point out, “it’s just that more aggressive aeration will cause some disruption to the surface and the green will take time to settle.”

The new Verti-Drain is going to see a great deal of use as Barry intends to make use of the machine with 8mm solid and 10mm hollow tines during the season.  Barry again, “The versatility of the Verti-Drain™ to use solid tines up to 1 inch; hollow tines up to 11/4 inches; and smaller needle tines as required means we have plenty of options for every eventuality.”