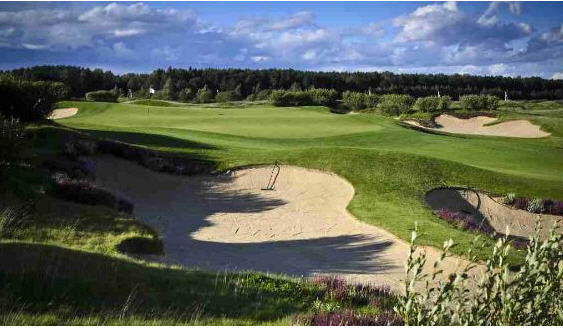 PGA National Russia was announced as a finalist in the recently released Golf Inc 2012 Development of the Year awards. The 7,400 yards European Golf Design course was highly praised by the panel of judges and just missed out on one of the prestigious top 3 places which went to Cabot Links (Canada) 1st, Machrihanish Dunes (Scotland) 2nd and Sutton Bay (USA) 3rd.

“The course has been receiving high acclaim in Russia since it opened in September, it is now nice to get some international acclaim” said Club President Alexander Yarunin.

The championship layout is a blend of Scottish links and heath land style courses and is complimented by a 6,000m2 luxury club house which features 2 restaurants and 10 bed room suites.

“We are delighted to get this recognition from Golf Inc for PGA National Russia. We are anticipating the club will go from strength to strength this year and realise its potential as the number one golf facility in Russia” said Michael Braidwood, Operations Director of Braemar Golf, who manage the facility and who have worked with the client over the last 4 years on developing the golf club.

PGA National Russia is the centre piece of a 1,300 ha master-planned community in Tver Region of Russia, on the shores of the Ivankovskoye reservoir adjoining the Volga River, 90 km away from Moscow. It is set to become one of the landmarks of Russian urban development, a modern place for a work, living, and leisure. Link to awards article

St Enodoc Golf Club in north Cornwall has launched some dynamic, modern mobile content to showcase its Church Course, regarded as one of the finest championship links in England.

April 2021 will see the launch of Rocco Forte Private Villas, consisting of the first 20 branded independent villas overlooking the sparkling bay of Verdura Resort in Sicily.