Half a Million and Counting as JCB Marks Milestone 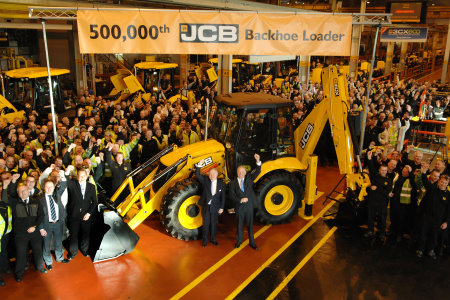 JCB has marked the production of its half millionth backhoe loader – the machine that made the company famous around the world.

The first backhoe rolled off the production line in Rocester, Staffordshire in 1953. Called the Mark One, it brought the new wonder of hydraulic power to construction equipment for the first time.

In the first full year of production in 1954 just 35 of the machines were built and it took more than 20 years for the first 50,000 to be made. Today one JCB backhoe loader rolls off the company’s production lines every three minutes.

Despite the maturity of the versatile backhoe loader, it is still one of the biggest selling pieces of construction machinery and is remains the world’s 4th most popular machine in the construction equipment sales league table.

He said: “When my father pioneered this machine all those years ago we could never have imagined how successful it would be and how it would totally mechanise jobs that until then had been done by hand.

“The backhoe is the world’s most versatile piece of construction machinery and that is what ensures the product will continue to thrive.”

JCB has always invested heavily in its backhoe loader range and an early catalyst for growth was in 1980 which saw the £24 million launch of the technologically advanced 3CX. Fast forward to the present and customers are about to starting reaping the fuel saving benefits of the launch of JCB backhoes powered by the JCB Ecomax engine, a development which will save them up to 11% in fuel costs.

Sir Anthony added: “The original 3CX launch was a pivotal moment in JCB’s backhoe history and from there the product went from strength to strength and laid the foundations for growth of the company and the introduction of a product range of over 300 machines you see today.

“It’s innovation over the past six decades that has made JCB a world leader for backhoe loaders and it’s innovation that will keep us in the lead with this product over the next 60 years.”

JCB backhoes are manufactured in the UK, India and Brazil and the company sells the product in 120 different countries. The business unit which manufactures the machines has won seven Queen’s Awards.

Royalty, Prime Ministers, politicians and TV stars have all been photographed in the cab of JCB backhoes over the years. The JCB backhoe was even the subject of a song which made the top of the charts. And it was a JCB backhoe which robbers used in a failed attempt to steal £350 million worth of diamonds from the Millennium Dome in 2000.

The 500,000th JCB backhoe to be produced was a 5CX model, which is the most powerful commercially available JCB backhoe ever made. It is also JCB’s most productive and able to shift 344 tonnes of earth per hour or load 196 lorries a day.

Already it is carving out new business for JCB, with the half millionth machine destined for a customer inRussia, which is one of the key markets.