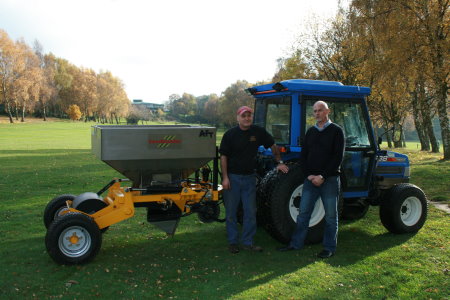 Torrential rain on the wettest part of Aspley Guise and Woburn Sands Golf Club was less of a problem after treatment with their new AFT Sandbander.

After the first pass on the problem part of the course improvement was instant – and continued despite up to an inch of rainfall during the following week.

The course is very free-draining with predominantly fine and even particles of sand which give rise to compaction. The problem is compounded by the ‘in’ route being the same as the ‘out’ route on some of the narrow approaches between holes – sometimes accommodating up to 600 pairs of feet a day!

Course manager Tony Lee is responsible for maintenance decisions on the course. “I haven’t been able to plan any routine this year,” says Tony. “We have had to react to conditions on a weekly basis. The incessant rainfall – which started the day after the hosepipe ban was announced – has caused problems at every level. “Mowing fairways and rough has increased to 4 or 5 times per week despite using growth regulators to control growth.”

“On the plus side, I am fortunate to be in charge of a club which has a greens committee with a healthy attitude towards course maintenance and is very straight talking,” says Tony. “Even in these difficult times I have not had to fight to retain my budget.”

Tony read about the AFT Sandbander in golf industry magazines and went to take a look at it at nearby Robin Hood Golf Course. “I wanted to see if it would provide an immediate solution to our drainage problem,” he says. “I was so impressed I arranged a demo at my course to see if the Sandbander could cope with the worst affected area – the approach to the 11th green.

Peter Smith, UK and Ireland Sales Engineer for AFT Trenchers, is pleased that word about the Sandbander is getting out. “We have an excellent machine to tackle surface drainage on golf courses. Although the demonstration took place on the most challenging part of the course, the AFT Sandbander coped with ease.”

“Tony was looking for a one-man operation and this is a perfect solution. He chose the Aft Sandbander ZE04 with towing wheels to attach to his 38hp tractor and can easily accomplish 1000 square meters in a day.”

The AFT Sandbander combines a unique blade design and oscillating movement to install drainage slits with well-consolidated sand. Tony used the Sandbander to successfully disperse surface water on the greens and re-direct to the existing lateral drains.

Suitable for tractors from 25hp with either hydrostatic or creep gear, it gives fast and easy installation of 25, 35 or 50mm sand slits with a maximum depth of 250mm (10inches). It also works well with lytag and gravel (up to 6mm).

The day after the demonstration, both the club captain and the chairman of the greens agreed with Tony that the results proved the point.