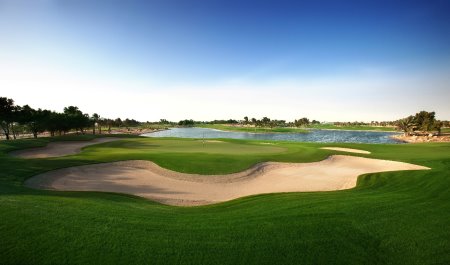 Narrower fairways and unforgiving rough make precision a must for the 120-strong field whilst power comes to the fore as the award-winning 18-hole course has been extended by 200 yards, making the balance between strength and accuracy critical in lifting the iconic Falcon trophy come next Sunday.

“This year has been about fine-tuning a course that has already received an immense amount of work over the last five years,” said Whittaker. “In addition to pushing the course up from 7,400 to more than 7,600 yards, we’ve tightened fairways, renovated or added bunkers and enhanced the rough. Come the Championship, the National is the Middle East’s most challenging course.”

With an eye on increasing ‘options’ during the tournament, Whittaker and his 60-strong agronomy team has worked with the PGA European Tour, Troon Golf, the managers of Abu Dhabi Golf Club, and Abu Dhabi Tourism & Culture Authority (TCA Abu Dhabi), the Championship organiser, to implement this year’s enhanced National Course challenge.

Course upgrades include an extended first tee to allow greater spectator visibility from the grandstands, while the 10th tee boasts new steps and a retaining wall – features Whittaker believes will benefit the field. Elsewhere, greens on holes one, two, three and 12 have all been extended, allowing for a wider range of pin placements.

“This year’s changes are subtle but true golf aficionados will really appreciate them. We’ve worked to increase the size of greens to enable more challenging pin placements and implemented improvements to some of the tees. Fans will see the changes on Thursday but players will really take notice on Sunday,” added Whittaker.

“When the Club hosted the first Championship in 2006, this was a good course.  Now, with the help of original course designer, Peter Harradine, it’s great. It is long enough to fox Tiger, it is tricky enough to exasperate Ernie and it has got the greens to goad Rory. It is a real Championship course.

“We are very pleased with how it is playing and we think it will be a real challenge of golf this year. Whoever walks off the 18th on the final day to collect that trophy will have earned it.”

“Every year we welcome thousands of new fans,” he said. “And this is where Abu Dhabi comes into its own. There is no better course in the region – if not the world – to get up close and personal with the world’s best players. You can see players’ brows as they stand on the tee and feel every drive, iron and putt from just yards away – it is an unbeatable experience.”