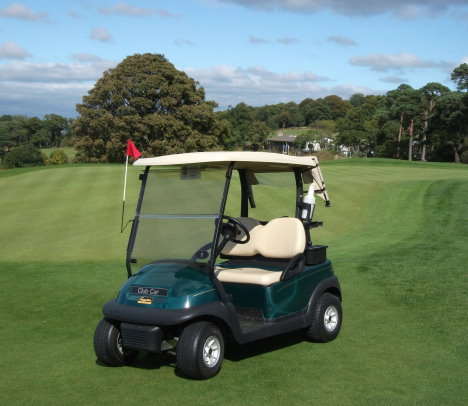 Bray Golf Club has purchased a new high-tech fleet of golf cars, each fitted with a state-of-the-art Guardian system, from Club Car – the first club in Ireland to take advantage of the cutting-edge technology.

With the lease of Bray’s current fleet of petrol cars up for renewal, the members’ club – established in the 19th century – opted to invest in a new collection of zero emission golf cars.

The club particularly required robust and well-built vehicles with reliable brakes that could comfortably handle its undulating and tiered fairways and greens.

“The specific nature of our course meant that we needed to test the golf cars on site before making an appropriate purchasing decision – buying off-spec was not an option,” explained Alan Threadgold, General Manager of Bray Golf Club.

“Following these rigorous tests and assessing performance against our specific scoring matrix, Club Car came out ahead of those market competitors we also evaluated.

“Nevertheless, having technology that offers such comprehensive fleet management capabilities has enabled us to track the on-course movement of our golf cars and the exact charge levels of each vehicle. It has also allowed us to set maximum speeds and define, at the click of a button, any restricted zones.”

Because of Ireland’s varying weather conditions, particularly in winter, members and visitors have been unable to use golf cars or play the Des Smyth (2006 Ryder Cup Vice Captain) and Declan Brannigan-designed Bray course as much as they’d like. However, with the introduction of the new Guardian SVC-integrated fleet, the club has been able to create designated areas and paths over which the golf cars can run freely without unduly damaging the course.

This has enabled members and visitors to enjoy a much greater course time while, as a consequence, Bray has benefited from increased revenues during adverse weather conditions.

“There is no doubt that with Club Car’s Guardian SVC system we are realising the potential of the most desirable course management features of GPS technology,” insisted John Roche, Honorary Treasurer at Bray Golf Club. “With this new management tool we are now able to adhere to crucial health and safety practices, and, more importantly, protect the club’s key assets – our members, visitors and the course.”

He added: “The new fleet and accompanying technology have put us ahead of any other golf club inIreland. In due course we may go one step further and pioneer the ‘upgraded’ Visage system – the multi-functional mobile golf information system that is currently the talk of the golfing industry.”

The introduction of the new fleet at Bray Golf Club was facilitated by The Buggyman Limited,Ireland’s sole importer and distributor of Club Car vehicles.

Alan Threadgold concluded: “To say that we have been very impressed with what Club Car and The Buggyman have provided, along with the high quality of the Guardian SVC system, would be an understatement.”