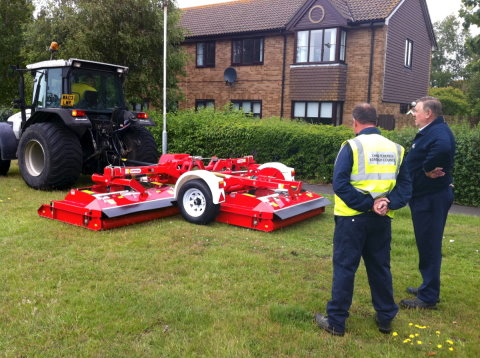 The scarcity of warranty claims involving Trimax flail and rotary turf mowers has led to a reminder being issued by Trimax Mowing Systems that virtually all of the company’s machines are covered by a comprehensive three year warranty against defects in design, materials or workmanship.

Making the announcement, general manager, Michael Sievwright, pointed out that the three year warranty had been introduced originally by the company back in 2010.

“Since then, the cost to Trimax of honouring warranty claims has averaged less than half of one per cent of the total value of our retail sales,” he said. “This is a world class figure by any comparison, highlighting the exceptional design and build quality of Trimax mowers which helps keep them hard at work doing the job for which they are intended.”

“By designing and building all Trimax mowers to a consistently high standard, we not only keep downtime to a minimum for the benefit of customers but we benefit ourselves by not having to pay out continuously for repairs or component replacements under warranty.”

If there should be any issues, Trimax is able to respond immediately to ensure that the affected machine returns to work without delay, prioritising also the investigation and resolution of any failed part or component.

That said, Mr Sievwright pointed out that feedback from dealers and customers world-wide revealed that Trimax mowers are proving exceptionally cost-effective to own, both within and outside the company’s standard warranty period.

Used for more than eight seasons before being replaced in June 2011 by the latest Pegasus Series 3 493 with independent deck lift, the council’s original 4.93m three-gang trailed roller mower suffered no problems during its warranty period, which was for just one year at the time.

During the mower’s time with Christchurch Borough Council, the only calls made to the local Trimax dealer were to order replacement blades and belts.

“The machine impressed with its build quality and reliability,” commented Parks and Open Spaces Senior Supervisor, Karl Bonner. ”Its low cost of ownership and mowing capabilities convinced us to remain with Trimax when the time came for replacement. The new machine is proving a worthy replacement, dealing comfortably with this year’s high grass growth right across the Borough.”

By way of a footnote, Michael Sievwright reports that Christchurch Borough Council’s original Pegasus mower is back at work maintaining horse paddocks for a private landowner in Cambridgeshire. The machine is said to be performing as well as it did when it was delivered new almost 10 years ago.