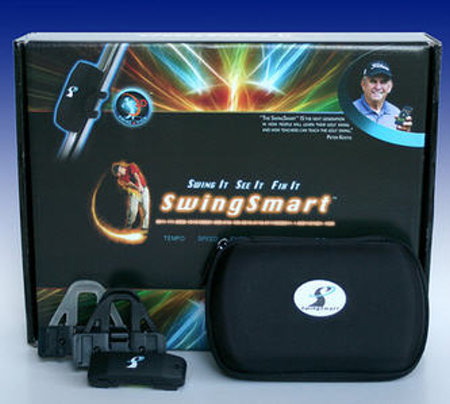 The most advanced affordable golf swing analysis system on the market, SwingSmart, has been lauded in a head-to-head test of similar products and awarded number-one status by the respected US golf website MyGolfSpy.com

The popular website, with more than 275,000 unique visitors every month, is highly respected for its honest, independent product reviews and, in July, subjected seven swing trainer products to an extensive testing and comparison programme.

The website stated that the “Swing Trainer Buyer’s Guide is the single most in-demand review that MyGolfSpy has done”. And SwingSmart came out on top in one of the most competitive product markets in the game.

The reviewer said: “As far as the on-shaft devices (sic), SwingSmart is the best. It attaches under the shaft, so it’s barely noticeable at address, it’s tiny and lightweight, and it doesn’t twist. The only real negative about it applies to all of the on-club devices: you need to move the device (or at least the sensor) when you change clubs.

“The SwingSmart app hasn’t really changed since last year. The layout is very simple and shows all you need to know on one screen. The 3D image is still good. Customizing your clubs and changing clubs during a session are both very easy. It’s still the fastest app in terms of how quickly it puts numbers on the screen.”

It continued: “One of the things I like best about SwingSmart is that it doesn’t overwhelm the user with numbers. Instead, it provides four easy to understand, actionable data points that are consistent and good. Face to Path was consistently within 2-3 degrees of FlightScope and swing speed was consistently 2-3 MPH below what FlightScope reported.”

In awarding SwingSmart the accolade of overall winner, it added: “SwingSmart is the most refined device in this category. Where others have added new features, SwingSmart has opted for perfecting the motion capture that powers the whole thing.”

And another reviewer added: “… if I had to make a blind recommendation of which device to buy, this (SwingSmart) would be it.” In conclusion it stated: “Each device offers something very different from the others … People who want some numbers, but not too many will like SwingSmart …”

Having been launched in Europe only in January, SwingSmart has received glowing reviews in the golfing media and sales through the dedicated website have been good.

Ease of use, combined with unmatched quality and content has made SwingSmart the leader in digital swing analysis since it was launched in America last year and it enhanced its burgeoning reputation further by claiming a top award at January’s PGA Merchandise Show in Florida.

A first-of-its-kind solution and costing just £199, the unit wirelessly communicates with a free app for iOS and Android devices. Clipping simply on to a golf club shaft, SwingSmart, which weighs just 19 grams – less than an AA battery – sends 3D swing data straight to a smartphone or tablet device using bespoke Bluetooth technology.

With the SwingSmart attached to the club, the app shows four crucial data elements relating to the swing: tempo, swing speed, and the angle of both face and attack, and works with every club in the bag – including the putter. A graphical 3D view shows the swing plane and illustrates where improvements may be made. It can be used indoors or out, anytime, anywhere, and the simple, yet essential, display of information can be analysed and interpreted by the individual alone or in discussion with a coach, and is key to game improvement.

Developed by an experienced software design team in association with CBS golf analyst and top instructor Peter Kostis, the app is extremely user-friendly, fun and beneficial to all skill levels, and presents detailed, easy-to-interpret analytics on:

Perfect for revolutionising golf training for both casual and committed players alike, SwingSmart can help all golfers easily identify and correct problems in their games.

An effective practice tool for the off-season, it features a special training mode that provides the key stats necessary to help players learn the proper swing motion, without the pressure of hitting a ball. Included in its features is the ability for players to save what they consider to be their best swing and use it as the model with which they compare the rest of their swings.

And its benefits don’t end there as SwingSmart can also be used as a teaching aid for professionals, whether it is during a lesson on the range or footage that golfers have taken themselves whilst out on the course and then replay back to their coaches.

Kostis said: “I’ve worked with thousands of players over the years and SwingSmart is far and away the best tool for quickly and easily showing students exactly what they are doing during the swing. The beauty of this system is that golfers can use it on their own time to practice anywhere, or it can be paired with traditional instruction so users can bounce questions and ideas off their club pro.”

Designed in the USA, SwingSmart’s portable sensor module comes with a personal carrying case and rechargeable battery that lasts more than four hours. Widely recognised by PGA professionals as a way to augment lessons, the app is available for free download via the iTunes store and Android Marketplace.