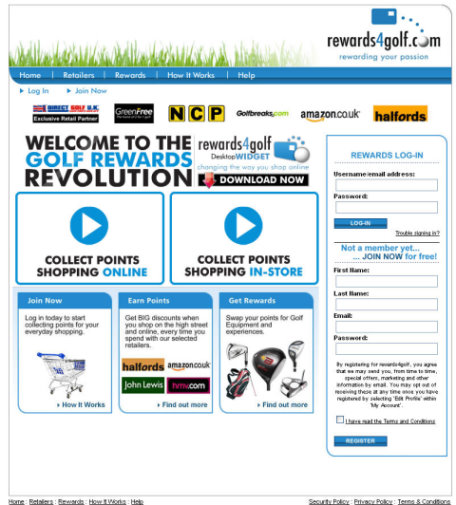 Since launching in 2008, the rewards4golf programme has gone from strength to strength, with the number of golfers joining the programme and amount of money being spent with retailers continuing to rise. Last year the scheme welcomed its 250,000th member, as more people became engaged with the extensive network of high street and online retailers enrolled in the scheme.

Members spent over £15 million with retailers, £8m on golf retail, and £600,000 on rewards when redeeming their points. The scheme will continue to offer value for golfers and retailers alike in 2012, as new members continue to be recruited at a rate of over 6,000 per month.

The mandate for rewards4golf has always been to help golfers’ make their passion for golf more affordable by offering them the chance to make savings from their everyday shopping. In total there are over 3,000 rewards4golf high street partner outlets, including Halfords, Cineworld, Debenhams and Direct Golf UK. With a further 250 online retailers involved in the scheme, including Amazon.co.uk, Marks & Spencer, John Lewis, Boots and Golfbreaks.com, golfers have more opportunities than ever to make use of their rewards4golf membership.

Having spent over £15m with programme retailers in 2011, members have benefitted from their rewards4golf points, with one member making a staggering total saving of £2,860 on his golf purchases in just a 12 month period.

“We’ve been the exclusive golf retail partner of rewards4golf since the beginning of 2009 and it’s been a fantastic partnership for both us and our customers,” commented Neil Bell, General Manager, Direct GolfUK. “Our principal aim was to help our loyal customers make their golf cheaper, and in doing so we’ve found that our customers are also more loyal to us. AsEurope’s largest multi-channel golf retailer, we understand that our customers are looking for value and rewards4golf enables us to reward them at the same time.”

As growth in the golf industry has been largely static, there’s never been a better time for retailers to promote themselves to a growing number of golfers and be involved with the rewards4golf programme. Despite a challenging economic environment, the latest rewards4golf research has shown that members are increasingly loyal towards partner retailers.

For example, customers who used points to make purchases in Direct GolfUKshopped on average five times more often and spent ten times more compared with customers not involved with the scheme. 2012 looks set to continue that upward trend, as rewards4golf joins forces with its golf partners to offer members even more opportunities to earn points and save money.