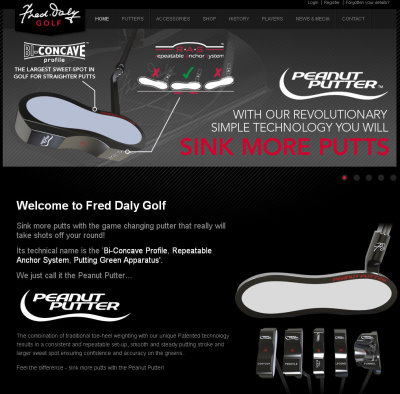 Fred Daly Golf will travel from Northern Ireland to debut the Peanut Putter line in the US for the first time at the 2013 PGA Merchandise Show.

“We are extremely excited to be coming to the states to show the golf industry our product line,” said company founder Robin Daly, son of the legendary Fred Daly. “Not a lot of people know that my father actually made several of the clubs that he used to win the British Open, his two Irish Opens and compete in two Ryder Cups in the USA. He inspired me to combine my passion of golf with business and I am proud to be able to continue my father’s craftsmanship in developing our revolutionary peanut putter concept.

“Together these deliver increased MOI and the largest ‘sweet spot’ in golf, which ensures every grade of golfer can achieve a more consistent setup and strike.” added Daly.

Launched at The 2012 Irish Open at Royal Portrush this past summer, the Fred Daly Peanut Putter line has received much fanfare throughout Europe and has received much praise from European TOUR Professionals. “We are looking forward to showcasing our product line to the US PGA Professionals and retailers from around the world,” said industry veteran and Fred Daly Golf consultant Dwight Hansen. He added, “The technology behind the Peanut Putter line may make golfers forget about anchored putters”.